A pragmatic, ambitious 7-point plan to renew the U.S. economy, enrich its citizens, and lead the world in fixing the climate.

The traditional narrative on saving the climate runs something like this: Americans use too much energy. We're greedy and wasteful. We need to scale back. Turn down the thermostat and turn out the lights. Live at a small scale and grow our own food.
It's no wonder people resist. A price on carbon seems like a punishment.
There's a better way. We can revive the American can-do spirit that conquered the continent and took us to the Moon. We can make more money, drive faster cars, and clean the carbon right out of the air.
Most people aren't aware of what's really possible. Farmers can absorb massive amounts of carbon. Advanced nuclear technologies fix the problems of older reactors, with new designs that can't melt down, can't make bombs, and eat nuclear waste. With plenty of energy, oil companies can make gasoline directly from CO2 in the air.
It's all right if some technologies don't work out. We have backup options for our backup options.
We just need a way to make it pay. We can promote a simple idea: if I dump trash in your yard, it's up to me to clean it up, or compensate you for your trouble. If I emit carbon, I pay to absorb it. Otherwise I pay a fee that compensates everyone.
We can start gradually with a modest fee, building confidence as we develop new technologies and find cost effective ways to make it work. As people get used to getting monthly carbon checks, and as they see the ability of real working technologies to reduce emissions without crashing the economy, it'll be easier to get more aggressive.
We can bring the oil companies along, still using their pipelines and refineries, even as we give them an escape from peak oil.
With our vast farmland and stockpiles of nuclear fuel (inaccurately called "waste"), America has the resources to leap ahead of the rest of the world, build a vibrant 21st-century economy, and close the carbon loop.

1: Clean up your mess
We start with a simple idea: if you emit a ton of carbon, you must pay to absorb a ton from the atmosphere. The easiest way to manage this is for businesses to specialize in absorbing carbon. After submitting to audit, they can sell emission rights to major emitters, such as oil drillers and coal mines, which pass on the cost to purchasers. We can absorb carbon using a variety of methods, at surprisingly low cost.
2: Fees and dividends
If someone does emit without paying to absorb, there has to be some kind of penalty. We can have them pay a fee. Whatever fees we collect, we distribute to the people, equal amount per person. Everyone is affected, so everyone should be compensated. If no absorption happens at all, perhaps because the technology isn't ready, the plan reduces to James Hansen's "fee-and-dividend." The fees can be increased gradually, on a regular schedule.

3: Carbon tariffs
If domestic carbon emitters have to pay, it's only fair that importers should too. Otherwise, domestic companies would be at a severe disadvantage. Fortunately the WTO allows tariffs for environmental purposes, as long as they're applied fairly. Distribute tariff revenues to citizens, just like the domestic carbon fees. It's the citizens who have to pay higher prices on imported goods, so they should get the money to compensate.
4: Advanced nuclear power
Economic incentives are all well and good, but if we don't have the physical ability to radically reduce emissions at reasonable cost, our incentives won't make it happen. There are limits to efficiency and sequestration. Transitioning to carbon-free energy sources is the only long-term solution. To accomplish this, we can't afford to take options off the table. Many experts are skeptical that renewables can do the job, due to intermittency and storage issues. While this proposal supports renewables, it also advocates an aggressive program to develop advanced nuclear energy, including integral fast reactors and liquid thorium reactors. In addition, it advocates modest additional investment in alternative nuclear fusion projects.
Advanced nuclear technologies can destroy nuclear waste, produce little waste of their own, are resistant to proliferation, and are extremely safe. The U.S. has a large inventory of nuclear waste that could jumpstart an ambitious program.
5: Close the carbon loop
It's not enough to replace electric power plants. We need to do something about transportation, and there's no telling when we'll have the batteries and infrastructure to handle an all-electric vehicle fleet. We need a backup plan. Luckily we have one. With the waste heat from advanced nuclear plants, we can make gasoline and diesel from the CO2 in the air, using any of several technologies. Los Alamos estimates the cost as low as $3.40/gallon retail. With carbon fees in place, that would be especially competitive.
We can use the same cars, trucks, gas stations, and pipelines we have right now, and keep the oil companies in business. We get all the advantages of biofuels, without displacing ecosystems or food production.
6. Financing
Building major new non-carbon infrastructure is expensive, and we need most of the money up front. Nothing happens otherwise. Unfortunately the money seems a bit short these days. But that's an illusion. With a bit of imagination and public involvement, we can get all the capital we need.
7: White Roofs, White Clouds
It takes time to to change our entire energy infrastructure...time that we might not have. Methane is already bubbling out of permafrost, icecaps are already melting. Positive climate feedbacks could take matters out of our hands. We can buy ourselves some time, allowing a more gradual approach to carbon fees, by cooling the planet directly. This proposal advocates two low-risk methods: white roofs and white clouds.
Global connections
All of these strategies can apply at the international level as well. For example, many countries could start implementing carbon fees and tariffs, gradually increasing the incentive for recalcitrant nations to join in. A carbon fee is likely easier to negotiate internationally than caps; see the Global proposal 2010 Winners Combined.
"Clean up your mess" and "Close the Carbon Loop" are somewhat similar to the Global plan Fix the System. The Safe Nuclear Power plan has more detail about advanced nuclear, specifically thorium. Other related global plans include Carbon Fee and Dividend and Carbon-Negative Biochar Economies. 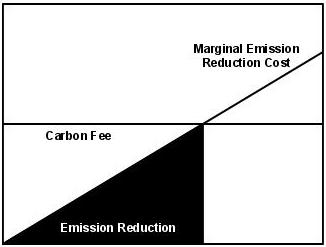 Emitters will choose to reduce emissions or pay for absorption, whichever is cheapest, thus saving money for the same net reduction. 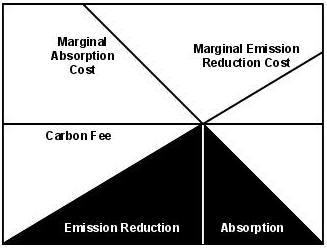 Vision of the future under this proposal

By 2050, the transition should be complete.
Civilization is powered by safe, compact nuclear reactors that make very little waste, along with as much wind and solar as turns out to be practical. Our huge stockpile of nuclear waste is gone.
Transportation is partly electric, and partly fueled by gasoline or diesel made from the CO2 in the air. Oil companies do a solid business, having successfully navigated the decline after "peak oil."
The coal industry is gone. The miners were well-compensated, and the stockholders turned a tidy profit. They powered civilization throughout the industrial revolution; now they depart with our thanks (and a sigh of relief).
In the transition, emissions from fossil fuels were absorbed with a variety of sequestration methods. Now those methods are winding down, as civilization approaches a closed cycle for carbon fuels. The last to leave is natural gas...cheap, plentiful, and relatively low in carbon. But soon, we make even that from CO2.
Agriculture has been transformed, using topsoil-restoring methods, biochar, and deep-rooted crops to sequester large amounts of carbon, while maintaining excellent productivity. Farmers have made a lot of money selling carbon rights, as well as by adding wind turbines to their land.
Cities gleam white, even as ships seeding ocean clouds turn into port. By keeping the globe cool during the transition, we've averted runaway warming. The icecaps have stabilized.
America has led the way, collecting large sums from import duties until other nations caught up, and more from sequestering much of the world's carbon. America leads the world in advanced nuclear technology, and its cheap, plentiful energy has propelled the economy to new heights.
With populations even more urbanized than today, plentiful, cheap, nonpolluting energy, and advanced automation, indoor farms start to reach their prime. Cities are discovering they can produce much of their own food. Some of our farmers retire rich, and let their farms return to wilderness. In their rich soil, trees grow rapidly, reforesting the land.
Urbanites have lower birth rates. Sometime around 2050, the world's urbanized population begins to shrink (Brand). By 2100, humans live primarily in scattered dense cities that are nearly self-sufficient in food production. Our energy sources take very little space and won't require mines for centuries (if ever). Vast amounts of land are returning to wilderness. The Earth, at last, is healing.
Bibliography

Bates, Albert. The Biochar Solution
Blees, Tom. Prescription For The Planet
Brand, Stewart. Whole Earth Discipline: An Ecopragmatist Manifesto
Hansen, James. Storms of My Grandchildren
Lynas, Mark. The God Species: How the Planet Can Survive the Age of Humans
MacKay, David. Sustainable Energy - Without the Hot Air
Muller, Richard. Physics for Future Presidents
Nordhaus, William. A Question Of Balance: Weighing the Options on Global Warming Policies
Stoft, Steven. Carbonomics: How to Fix the Climate and Charge It to OPEC
Yeomans, Allan. Priority One: Together We Can Beat Global Warming

By:  Dennis Peterson
Contest: Contest 2011: National 2011
How should national economies evolve through 2100, given the risks of climate change?
Follow on: