This proposal is to create a common, open set of technical standards for organizing and sharing community GHG emissions data.

Urban areas cover 2% of the Earth's surface, yet contribute approximately 70% of global GHG emissions. Cities are a critical driving force behind climate change.  Urban areas are also the principal setting in which climate mitigation* and adaptation solutions will emerge.

We know we must measure what we want to manage. Thus, accurate and consistent GHG emissions data is needed to design local mitigation strategies and monitor their effectiveness:

What’s the Problem: It is too difficult to access community GHG emissions data. For communities that have completed GHG emissions inventories, they often share results in a pdf inventory report. Although helpful, these static reports do not encourage resue and remixing of the raw GHG emissions data for new analyses or innovative uses.

What’s the Solution: We should create a common, open set of technical standards for organizing and sharing community GHG emissions data. An open data standard is a set of rules in XML or other format that can be commonly implemented by software developers and data analysts. Agreement on an open standard protocol enables wider use and adaptation across software tools and allows the seamless and automated reporting of urban GHG emissions information to regulatory and planning agencies.

* Note: This is an urban mitigation proposal (rather than adaptation, as this contest is categoriezed).

Creating an open data standard will help communities share the results of their community-wide GHG emissions inventory results with citizens, entrepreneurs, researchers and other cities.

Organizations such as ICLEI and WRI have established GHG accounting protocols, or "how-to" guides for community GHG inventories. These protocols outline which emissions sources should be incorporated and describe data gathering and calculation methodologies.  What these proposals don't do is provide an open data standard for easy online reporting.

Other organizations such as the Carbon Disclosure Project and the Climate Registry provide a venue for communities to disclose their GHG emissions. However, these city emissions data are not accessible to the general public as a bulk download or via API.

An OpenGHG data standard would help link the GHG Accounting and GHG Reporting processes, making data transfer more efficient and timely. In addition, releasing open, standardized, machine-readable data could benefit multiple sectors that influence future GHG emissions, from policy-making to start up ventures to waste management, as illustrated by the diagram below. 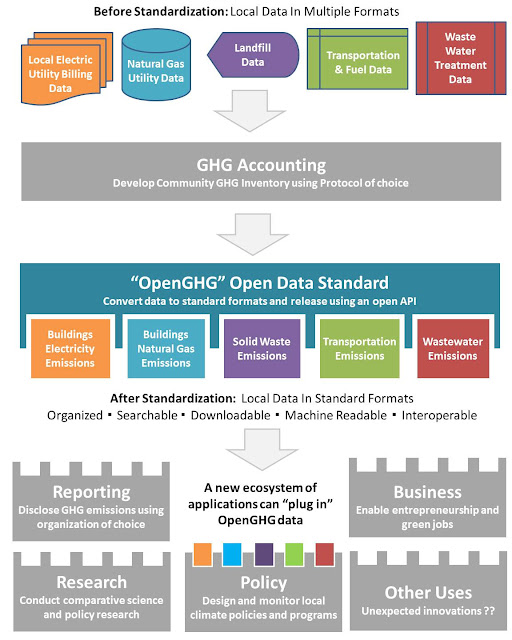 Open data standards are  developed through a fair, transparent, collaborative process, and are available under an open source license. Open standards may apply to data formats, to the protocols and APIs that are used to pass around information, and to tool configuration. A public GitHub, Google Group, wiki or other platform should be established to discuss questions such as:

If many different cities are publishing data about GHG emissions, it helps re-users of that data if they all publish the data using the same format. In general, reusing existing formats (such as using JSON or CSV rather than creating a custom text-based data format) helps re-users to take advantage of existing tooling.

API's help computers, websites, or applications talk to each other. Many have noted that the internet is moving towards an API-based model.

How have open data standards enabled innovation in other fields?

Public Health: Developed in collaboration with the City of San Francisco and Yelp, the Local Inspector Value-entry Specification (LIVES) is an open data standard which allows municipalities to publish restaurant inspection information to Yelp or any other website. And now, any city can participate.

This will need to be an interdisciplinary effort. We would need to bring sustainability analysts, local governments, utilities, and planning agencies together with information technology experts to create a useful data standard. A formal or informal organization could be formed to continuously assess, manage, and improve the data standard. Many open source software groups are managed by a non-profit entity with an elected board of directors.

The "open" in open data standard is a key distinction between this project and many other greenhouse gas emissions disclosure programs. To maximize innovation and participation, the creation and application of the data standard should be open to any interested individual or organization. Clearly defined principles, quality control and decision-making structures will be necessary. A creative commons or open source license should ensure that the data standard can be utilized by as many cities as possible at no cost.

By:  OpenCarbon: Cities
Contest: Urban adaptation: Climate resilient cities 2013
How can cities become more resilient to the challenges brought on by climate change?
Follow on: