Designing an oasis in the heat island of Cambridge

The urban heat island effect is as much a public space problem, as it is an environmental one. Cambridge is fortunate enough to have many public spaces, but many of them are exposed to sunlight and heat during the summer. What if it were possible to flexibly shade and cool these spaces, while also providing a focal point for public interaction? 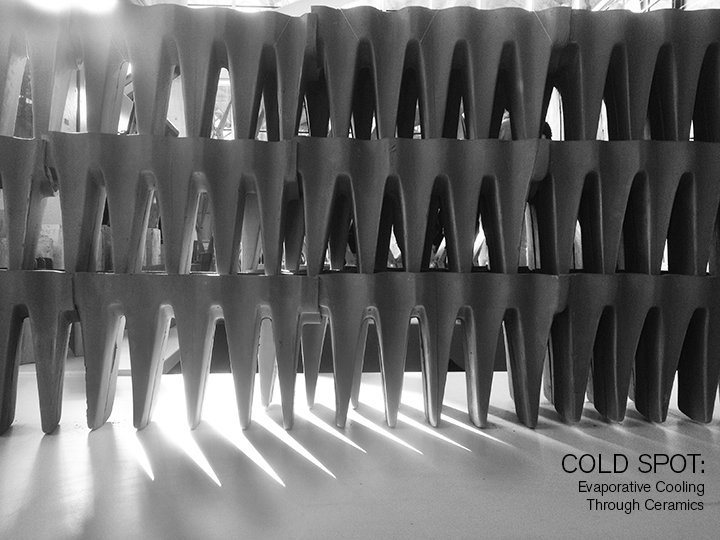 Cold Spot is a project developed by students at the Harvard Graduate School of Design to manage heat gain through the innovative use of ceramics. Terra cotta is cheap to produce, durable, and has the unique ability to allow water to pass through its surface. This last quality makes terra cotta an ideal material for designing evaporative cooling systems. This proposed system of stackable terra cotta bricks cools the surrounding air, while also creating a unique public environment.

Cold Spot is a series of screens, each consisting of specially designed terra cotta bricks. Although they are stackable, stable, and inexpensive, they are not your typical rectangular box. The bricks have been specifically designed to both hold water and allow air to pass through. Each brick consists of five “wells,” each holding a small amount of water. When air passes around these wells, the water evaporates and the air cools. This process has been used for centuries to passively cool areas, but this project adapts that same process to an easily installable system. 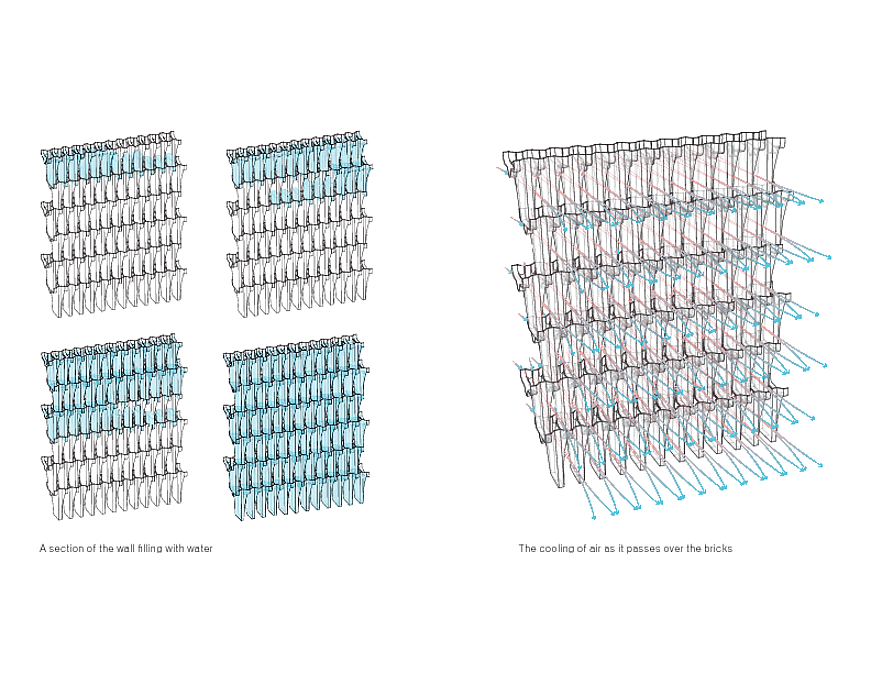 Because the system is flexible, Cold Spot can be installed in a number of different locations, although we have chosen one to illustrate the concept. The Kendall Square Community Ice Skating Rink is a popular lunch spot in the summer, but because of its winter role as an ice rink, there is an open, hot expanse of pavement in the summer. Cold Spot could be installed for the summer, providing shade, cooling, and an architectural attraction for the area. While our installation does not use ice, it does require a reliable water source, which the rink could provide. 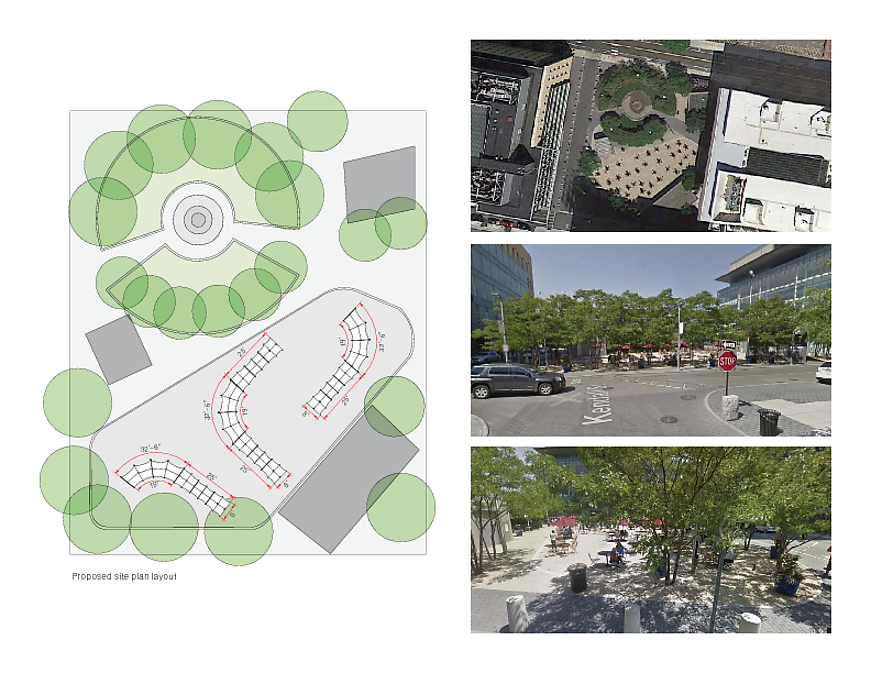 This team has already engaged with a number of professors at the Harvard Graduate School of Design specializing in fabrication. Professors Leyre Assensio Villoria and Carlos Felix Raspall Galli guided the project from the beginning, with the help of professionals at the Harvard Ceramics Lab. As a result, we've already invested a significant amount of time and resources into research.

We are also exploring opportunities to engage with fabricators and manufacturers to further explore the possibility of producing these elements. We've been referred to both Mudshark Studios and the Belden Brick Company as possible collaborators.

Because this project will be installed in a popular park near several Kendall Square corporate offices, we're also exploring possibilities for public/private sponsorship and community engagement through the design process.

While this is an effective solution for the urban heat island effect, it also invests in the public spaces of Cambridge. Cold Spot creates immediate, palpable change in the urban environment. While it will generate a cool micro-climate for people to congregate, it will also be a unique architectural attraction that will showcase Cambridge's commitment to environmental issues and sustainable design.

The installation could also operate at night. By effectively lighting and positioning Cold Spot, we can create a number of possible night time community events and activities, like movie nights and private events.

In addition, the development of this proposal could push forward the growing body of research on evaporative cooling and its effects. Ceramics, and other porous media, are only just beginning to gain traction as useful tools for sustainable design. This pavilion could be the first of its kind to implement this new research on a larger scale. 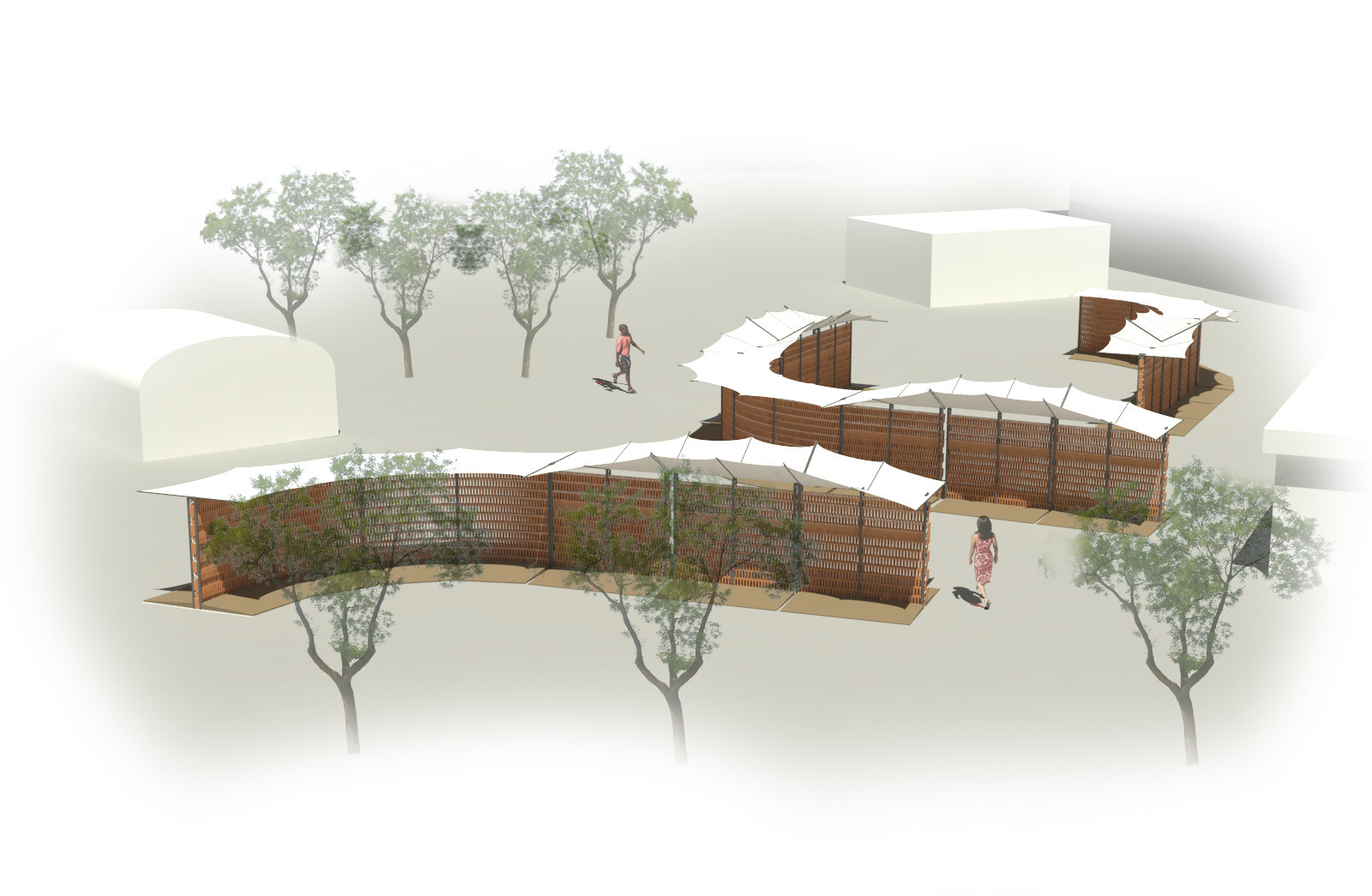 Based on our initial conversations with manufacturers, we've included a first estimate. This could be adjusted based on available space and funds. A larger or smaller pavilion would alter the cost.

There are several items such as filtration, lighting, and additional consultants that we have not had time to address, but their impact on the overall budget will be limited. 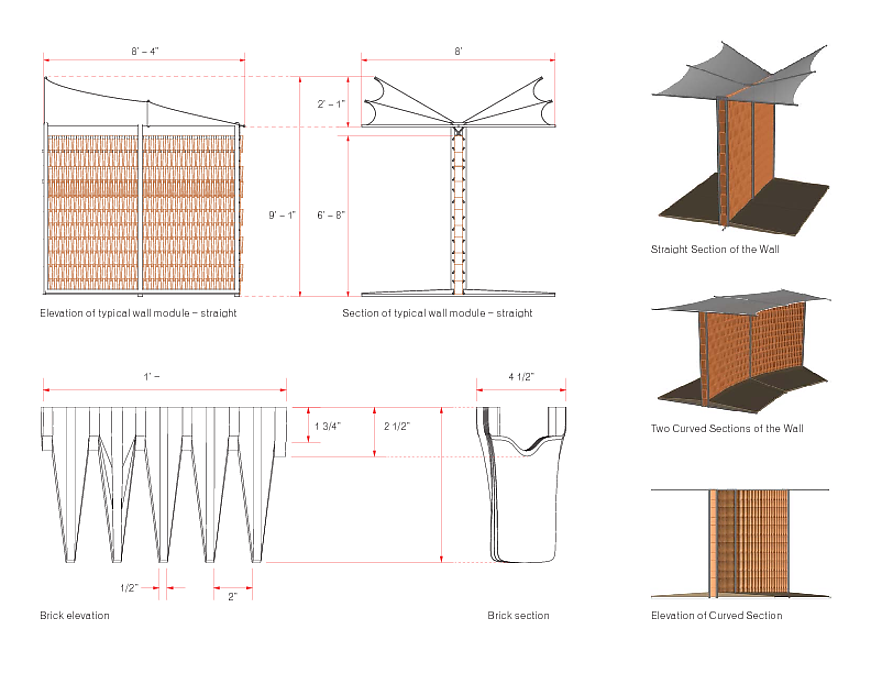 While these bricks are fairly durable, it is likely that a few will break, so we've designed the system to limit the impact of broken bricks. The wall is divided into sections, with it's own steel frame, so even if several bricks are broken, the wall will remain stable. The water spilled from a broken brick will also be minimal. Each brick stores only a small amount of water, and any water spilled will be caught by the row of bricks beneath. Bricks will also be easy to replace.

The chance that visitors will try to climb the wall is minimal. The openings are small, making it hard for even a child to get a hold. We have also explored several options for preventing any attempts, including signage, a staff member stationed nearby, or, a railing, if needed.

In order to prevent trash from building up in the bricks, we plan on adding either a terra cotta cap for the bricks or a mesh lining at the top. Although we have not estimated the cost for either of those solutions.

Due to the constant movement of water through the system, we don't anticipate any mosquitos making Cold Spot their home. The system will be entirely dried out over night, making mosquitos and the collection of mold highly unlikely.

All of the final production bricks can be fabricated and shipped in under two months.

Once fabricated, the project could be installed on site in a few days.

In order to get the maximum cooling effect in the area, Cold Spot will have to be filled once or twice a day, depending on its use. We have designed the system to fill up with water in less than 10 minutes, based on the flow rate of a typical garden hose. This will provide several hours of cooling, as the water seeps through the terra cotta. At the end of the day, the system will be empty and allowed to dry overnight in preparation for the next day's use. As of now, the system is not designed to collect rain water, although we've been exploring this as a possibility.

Cold Spot will also require some space for winter storage, as it's meant only as a summer installation. We chose the Kendall Square Community Ice Skating Rink because it has on-site storage for ice skating equipment, and could be used to house the pavilion during the winter months. While some bricks should be expected to break and be replaced, the structure will be extremely durable, so the pavilion could be brought back summer after summer for a number of years.

We've included some further explanation of the mechanics of the cooling system, based on the judges questions:

Cold Spot will cool the surrounding area using three different methods: shading, humidification/ dehumidification, and radiant cooling. While it is not technically operating as a thermal mass, some of the properties of heat transfer are similar. We've included some diagrams to show how these operate.

In the attached psychometric chart, each dot represents one hour of daylight over the summer in Boston, between June 10 and August 30. The black dots represent hours that are already comfortable, and the red dots represent the hours that could be made comfortable by the Cold Spot installation. This would result in a 150% increase of comfortable hours in the plaza from 521 to 800. 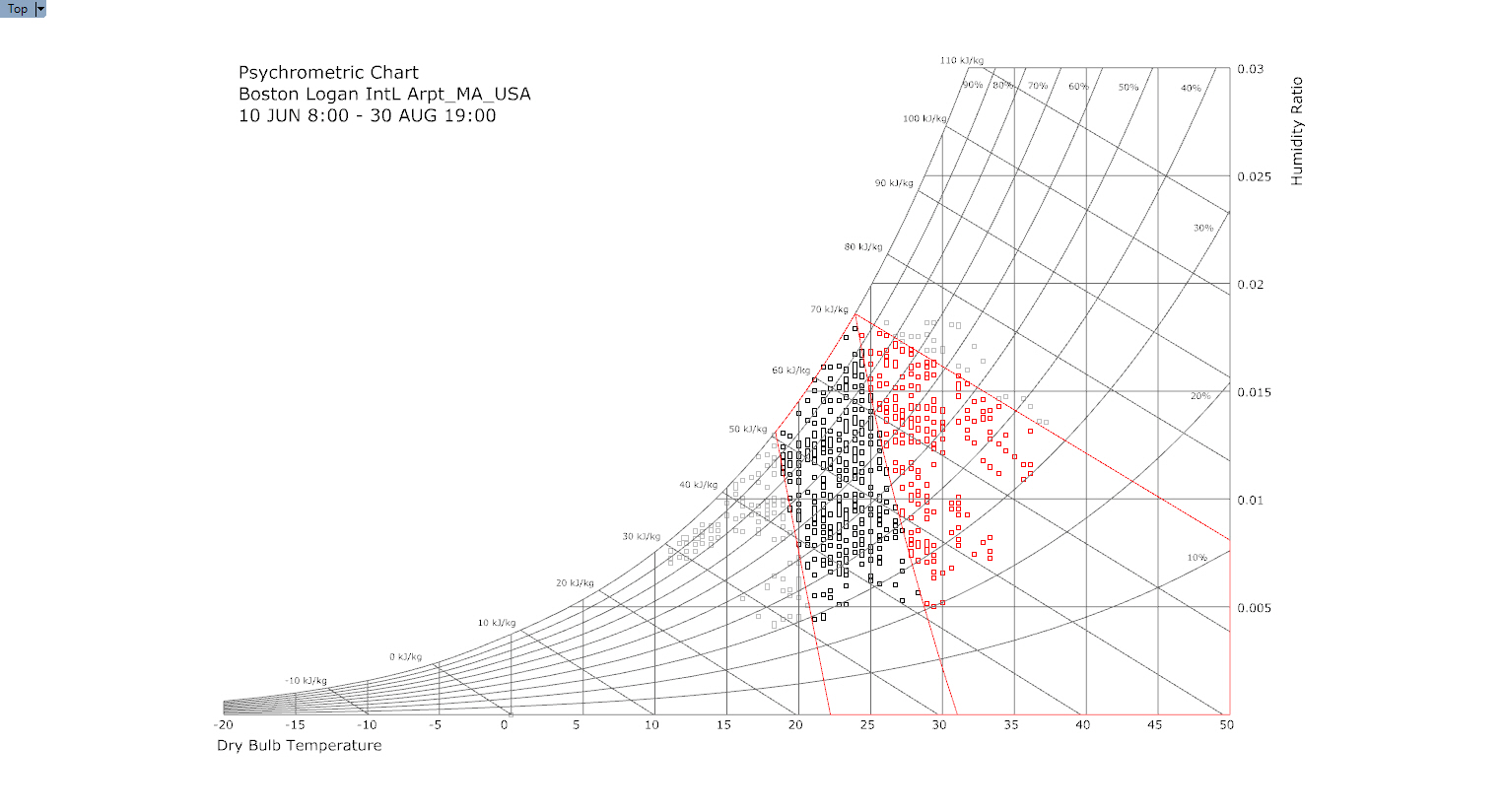 A simple shading mechanism could cause up to a 10 degree difference during the day, but even a moderate reduction in the temperature of the moist air next to the wall would account for a larger difference in the sensible heat that we actually feel.

The radiant cooling from the system would most likely have an effect up to ten feet away, much like the experience of being in a room with large windows during the winter. While the sensation is coldest close to the window, it has an effect on the entire room.

By:  Joshua Schecter
Contest: Urban Heat Island Effect 2015
How can we effectively mitigate the urban heat island effect in Cambridge, Massachusetts?
Follow on: