This proposal was created as a source of information to be linked to from a U.S. Regional Proposal.

An instrument near the summit of Mauna Loa in Hawaii recorded in 2013 a long-awaited climate milestone: the amount of carbon dioxide in the atmosphere there exceeded 400 parts per million (ppm) for the first time in 55 years of measurement—and probably more than 3 million years of Earth history.The last time the concentration of Earth's main greenhouse gas reached this mark seas were at least 30 feet higher—at a level that today would inundate major cities around the world. [1]

It was recently reported that sea levels would likely rise 20 feet or higher, rising to levels that were present many thousands of years ago when concentrations of carbon dioxide in the atmosphere (the major greenhouse gas) were at the same level they are today. [2] Carbon dioxide trapped heat in Earth's atmosphere caused temperatures to rise and ice to melt. The same process is happening now. It will continue to happen for some time even if all burning of fossil fuels stopped today. Rising temperatures and rising seas are "baked in" by a level of carbon dioxide that will take decades or even hundreds of years to decrease.

Perhaps humans (a) will stop burning fossil fuels because of threats posed by climate change and (b) will also take steps to protect vulnerable coastal areas from being inundated by seawater. Building dikes and seawalls to protect against rising seas is hugely expensive and will eventually fail if seas actually rise 20 feet or higher.

We present a plan to mitigate the eventual height of rising seas -- the plan described at the CoLab entry "Stopping Unstoppable Sea Level Rise."

That plan to mitigate sea level rise will fail if steps are not taken concurrently to stop burning fossil fuels.  That is one reason why we are offering the new plan presented here. This new plan focuses on a means whereby, over a relatively short period of time, production of electricity will become less and less dependent on burning of fossil fuels.

Sea level rise and other consequences of global warming will be affected by how soon humans are able to get climate change under control by stopping the burning of fossil fuels for energy.  Nobody actually knows how soon that will happen, and predictions vary widely. Some predictions are optimistic in positing that demand for electricity will be relatively flat because of increases in efficiency of how electricity is used. Other predictions posit rising demand.  For this discussion, we accept the not-very-optimistic predictions of Tom Randal of Bloomberg Business [3] who posits a rise in demand for electrical power of about 50 percent between his baseline year of 2012 and 2040.

Even when non-fossil-fuel energy sources are posited to grow from about 8 TWh annually to about 20 TWh annually by 2040, a significant gap is left between the predicted use of fossil fuels in 2040 (continuing at a level of about 15,000 TWh per year) versus the desired level of power generation from fossil fuels -- zero TWh.  See Figure 1. 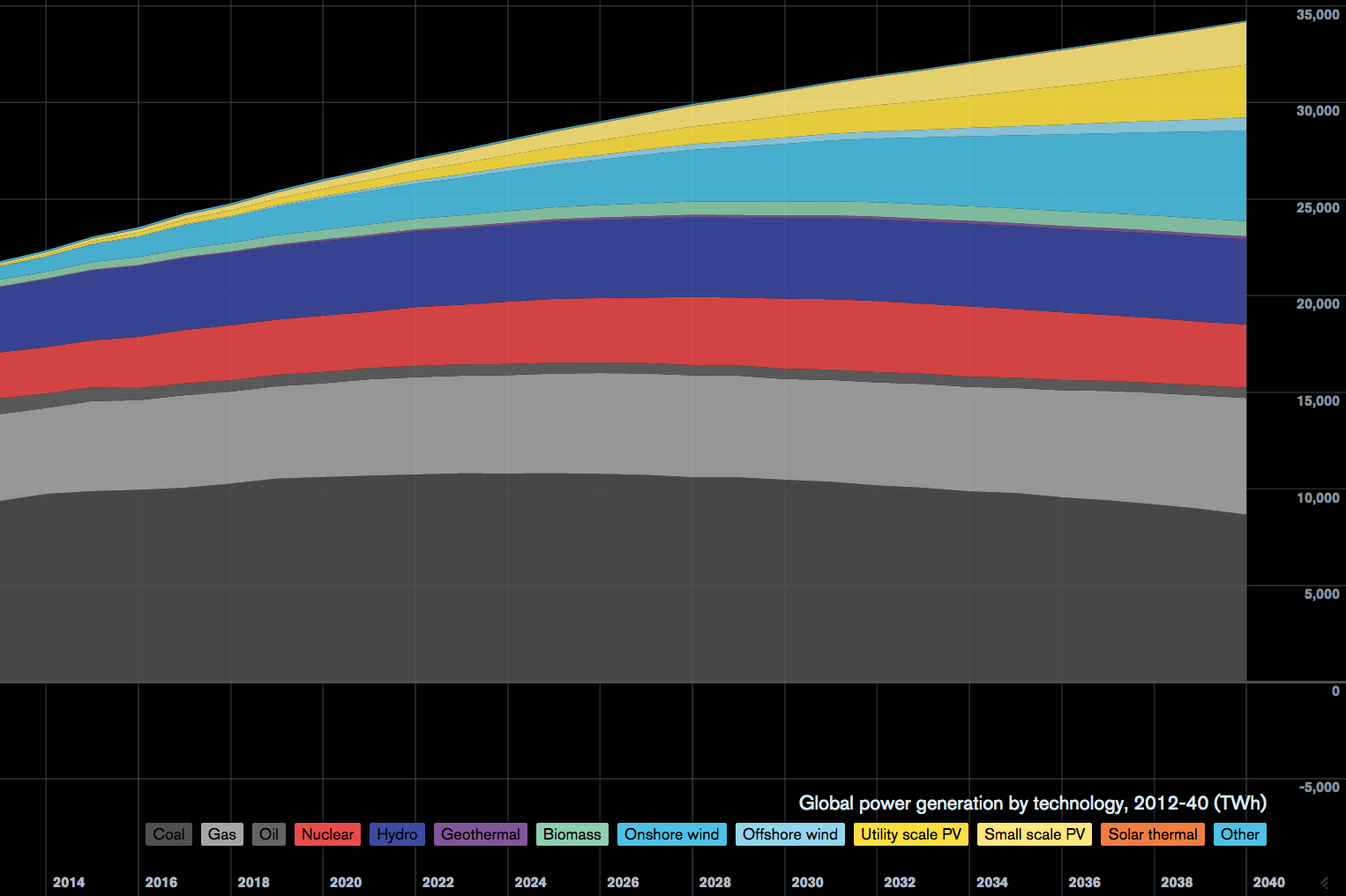 Figure 1. Global power generation by technology, 2012-40. The Way Humans Get Electricity Is About to Change Forever - Randal at Bloomberg Business.

The "Energy Island" plan we present here involves tapping largely untapped abundant renewable energy from ocean settings to reduce to zero the amount of fossil fuels that will be used to generate electricity in 2040.  Furthermore, we suggest that financing needed to build a large number of Energy Islands can come from simply diverting funds that are currently going to subsidize development of fossil fuels. That is a wasteful and counter-productive practice by governments around the world -- a practice that should end immediately.

According to Randal, as cited above, “Fossil fuels aren't going to suddenly disappear. They'll retain a 44 percent share of total electricity generation in 2040 (down from two thirds today), much of which will come from legacy plants that are cheaper to run than shut down. Developing countries will be responsible for 99 percent of new coal plants and 86 percent of new gas-fired plants between now and 2040, according to BNEF. Coal is clearly on its way out, but in developing countries that need to add capacity quickly, coal-power additions will be roughly equivalent to utility-scale solar.”

Randall is correct that fossil fuels will not “suddenly disappear,” but something close to that scenario must happen as soon as humanly possible to avoid catastrophic effects from climate change.  Energy Island is not about doing business as usual. It is about using $14 trillion of existing resources in a way that reduces to zero use of fossil fuels for supplying energy. Simply spending those same funds more rationally could finance the building of about 1800 Energy Islands that cost $8 billion each, totally $14 trillion over the course of 26 years.

If we adopt Randall’s assumption of a yearly increase in demand for electricity of 1.8 percent, in 2040 fossil fuels would be expected to contribute about 20,000 TWh--the real target for an Energy Island project to replace fossil fuels.

If burning of fossil fuels for generating electricity is to be eliminated, any comprehensive proposal must specify how additional electricity will be generated from renewable and safe sources of energy. Presently, non-fossil-fuel sources of generation are growing at a rate that will allow about 20,000 TWh of projected demand for electricity to be met by the year 2040 by non-fossil-fuel-burning sources of energy.  That leaves a gap in production of 15 TWh annually. We believe 1800 Energy Islands could close the gap.

The above calculation of power should be reduced by about half because generation output is typically 40 to 60 percent below theoretical maximums (except for hydroelectric, which is higher).  Thus, Energy Islands could be expected to produce a total yearly power output of 0.5 x 31,536 TWh = 15,768 TWh.

Therefore, the calculated output from 1800 Energy islands would be sufficient to cover the estimated extra 15,000 TWh of capacity needed by 2040 to completely eliminate the need to burn fossil fuels to generate electricity. That would be accomplished by more rationally directing funding that is already dedicated toward development of energy resources.

Said another way, combining (a) present trends for increase in production of electricity from renewable sources of energy with (b) a policy of more rationally directing subsidies for energy development toward construction of Energy Islands could completely eliminate any need to burn fossil fuels to produce electricity.

$14 billion, redirected from subsidies otherwise destined to be paid to fossil fuels companies.

Nations of the world, working together under the leadership of the United Nations.

Implementation starts as soon as possible and continues yearly until 2040 or when emissions from burning fossil fuels end.

The proposal shown here and the below-referenced proposal are both linked to from the United States' Regional Plan Proposal "Make Climate A Top Priority for Action by Every US Citizen and Organization"  by  Team Act on Climate. Thus, that regional proposal is supported by referencing both the proposal submitted here and the proposal listed below.

Additional details about Energy Islands are shown at "Energy from Oceans Replaces Energy from Fossil Fuels" by  Manaugh & Majdi.

3. “The Way Humans Get Electricity is about to Change Forever” by Tom Randall of Bloomberg Business, 6/23/2015, at http://www.bloomberg.com/news/articles/2015-06-23/the-way-humans-get-electricity-is-about-to-change-forever

By:  Manaugh&Majdi
Contest: Regional Climate Action Plan Workspace
Enter and work on regional climate action plans outside of the contest periods.
Follow on: