Desalination Hopscotch: Bringing Clean Water to an Aquifer Near You by Manaugh&Majdi

To cope with water scarcity, desalinated seawater conserves aquifers for responsible sharing by water users in Texas and elsewhere.

Desalination of seawater from the Gulf of Mexico is used to augment the supply of clean water that is available to users in Texas. Linking an underground system of aquifers allows the augmented supply of water to be distributed to inland users.

Known methods of desalination, drilling, pumping, treatment, transport, and injection are used in a number of "hopscotch" steps that bring clean water from one aquifer to the next.

Water quantity and quality are maintained in each aquifer that is involved in the operation.

This proposal represents a break in thinking about transport of water following desalination of seawater.  Instead of laying a long pipeline from a desalination plant near a coastline to a drought-stricken inland location, a "virtual pipeline" uses a chain of aquifers that each in turn makes clean water available to the next further-inland aquifer.

In an example presented here, the City of San Antonio, Texas, enjoys an augmented supply of clean water from a nearby aquifer. That clean water does not come directly from a desalination plant. Rather, it comes from a series of exchanges of water between aquifers. Those exchanges are initially enabled by using desalination to augment the water supply in the Gulf Coast Aquifer.

A similar series of exchanges could be used to ensure locations in Egypt against water scarcity if its supply of water from the Nile River were to become curtailed by a newly constructed dam in Ethiopia.

Pure, desalinated water from a seawater desalination plant is injected into an aquifer (Aquifer A) that is located near a sea coast, thereby augmenting and improving Aquifer A's water.

Further inland, water from Aquifer A is pumped, treated and transported as necessary, and injected into nearby Aquifer B, thereby augmenting and improving water quality in Aquifer B.

The treatment, if necessary, improves the quality of water from Aquifer A that is injected into Aquifer B such that the water is as pure or purer than water already in Aquifer B.

No treatment is needed if Aquifer A's water is already as pure or purer than the water in Aquifer B.

In the above scenario:

It is easy to imagine an only slightly more complicated scenario where users of a third aquifer (Aquifer C) benefit from an injection of water from Aquifer B.  Theoretically, the number of "hopscotch" events – pumping, transporting, and injecting – could extend from one seacoast to another.

We will advocate for desalination plans that can help provide solutions to water scarcity in ways that are environmentally responsible. Such plans will be welcomed by public water officials in drought-stricken areas where pumping and transport of groundwater (a) becomes overly expensive, (b) is not feasible as a long-term solution because aquifers will not recharge fast enough, and (c) is resisted by environmentalists and concerned citizens. See Figure 1 where a sign protests pumping of groundwater 142 miles from Texas’ Burleson County to San Antonio. 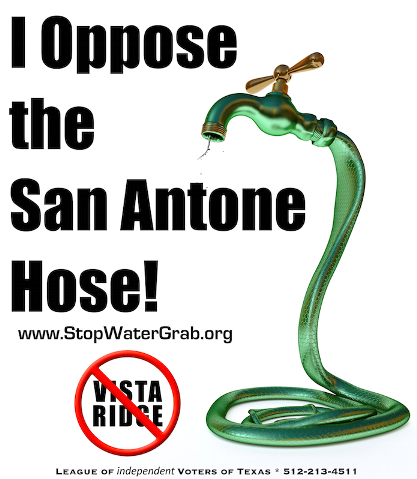 Implementing the Hopscotch Desalination Plan by public water officials will:

If public water officials in the US were to adopt a hopscotch plan to add desalinated water to their systems of water distribution, certain regulatory standards would be required by the Environmental Protection Agency (EPA) for Underground Injection Control (UIC) of Aquifer Recharge (AR) and Aquifer Storage and Recovery (ASR) wells. AR and ASR well owners or operators must submit basic well information to either the EPA or the state. The well is typically authorized if (a) the owner or operator submits the well information and (b) the well injection does not endanger a USDW (underground source of drinking water). [1]

The above scenario can be realized to benefit water users in many places around the world. A specific example is the state of Texas in the United States of America where: 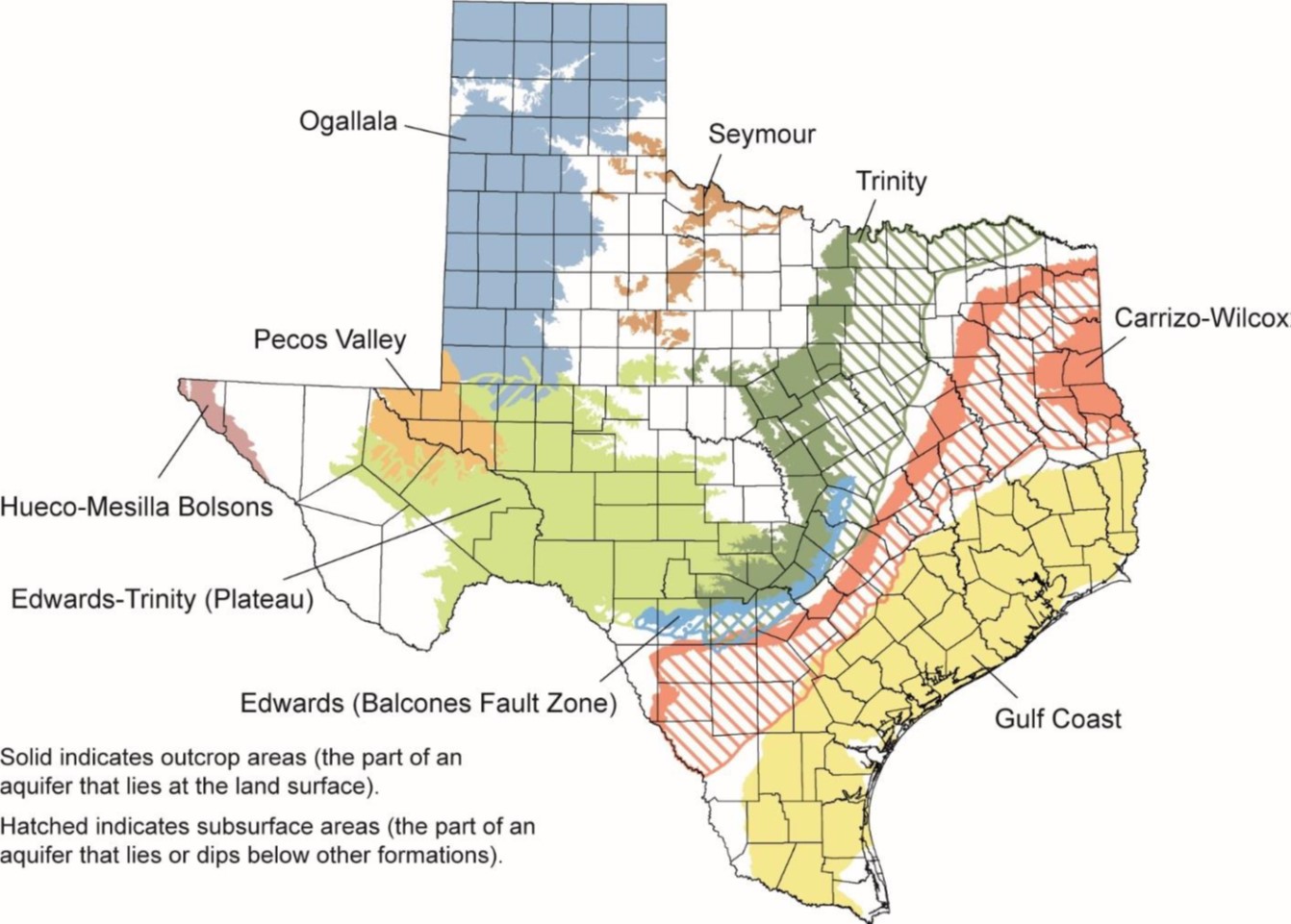 Step 1:  Seawater would undergo desalination at a convenient location near where waters of the Gulf of Mexico touch the Texas coast.  See Figure 2 showing Texas, part of the Gulf, and aquifers in Texas. A coastal part of Texas and a possible site “D” for a desalination plant is shown in Figure 3, where other salient locations are zeroed in upon and described in subsequent steps. 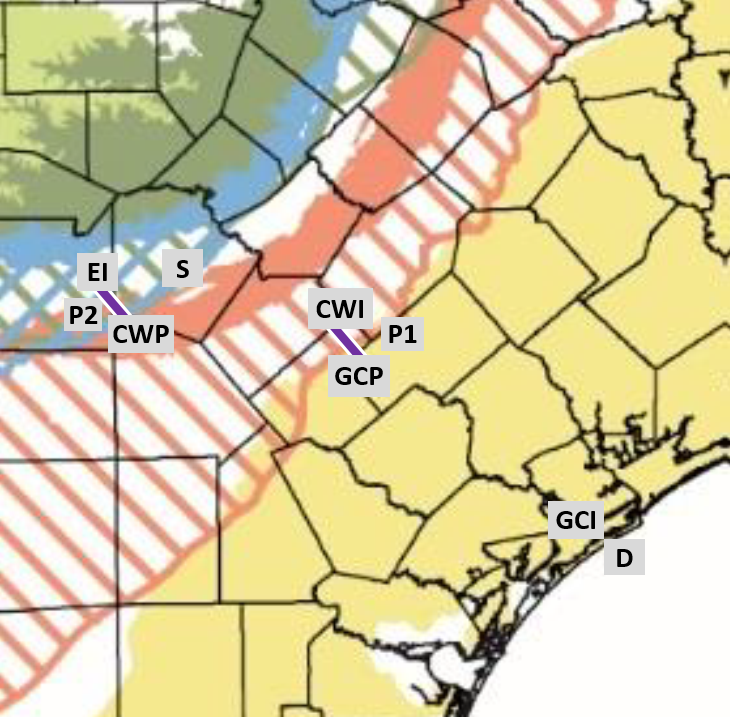 Step 2:  Desalinated water from Step 1 would be injected into the Gulf Coast Aquifer at location “GCI”, very near “D”.

Step 4:  At location “CWI” water is injected into the Carrizo-Wilcox Aquifer.

Step 5:  At location “CWP” water is pumped from the Carrizo-Wilcox Aquifer to be transported by pipeline “P2” to the Edwards Aquifer.

Step 6:  At location “EI” water is injected into the Edwards Aquifer.

Step 7:  At location “S” water is pumped from the Edwards Aquifer for use by consumers in San Antonio.

Applying Desalination Hopscotch could determine the difference between war and peace in various parts of the world. For example, war is threatened between (a) Egypt, which depends on water flowing in the Nile River, and (b) Ethiopia, which is building a dam to contain the Nile River far upstream from Egypt [2]. An alternative to war would be for Egypt to offset any loss of Nile River water by tapping an unlimited supply of desalinated water from the Mediterranean Ocean and the Red Sea. Desalinated water from those sources could be injected into the nearby and very extensive Karstified Carbonate and Nubian Sandstone aquifers. Virtually all of Egypt could be supplied with an abundance of water from those aquifers or by a single hopscotch step from those aquifers to other aquifers in Egypt. See Figure 4. 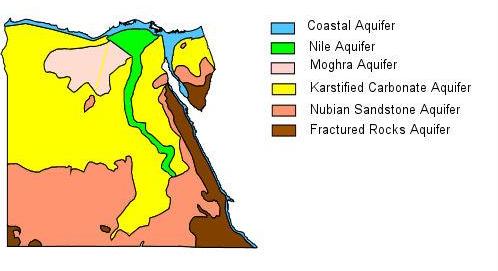 The San Antonio water utility, San Antonio Water System (SAWS), is planning to pump and transport water from Burleson County to San Antonio (Bexar County) through a pipeline project—the Vista Ridge Water Supply Project. The contract between SAWS and the Vista Ridge Consortium, the project contractor, will bring San Antonio up to 50,000 acre-foot (1 ac-ft = 1,233 m3) of water per year for 30 years with the possibility of extending water delivery beyond the end of the 30-year period.

Here is what it will cost SAWS to get 1 ac-ft of water through the Vista Ridge Water Supply Project [3]:

Here is what it will cost SAWS to get 1 ac-ft of water through the Desalination Hopscotch Plan [3,4,5]:

This cost comparison doesn’t include the cost of externalities that result from the negative environmental impact of installing and operating a pipeline along a 142-mile path to transport water from Burleson County to San Antonio.

So, the Desalination Hopscotch Plan would result in 30% savings for SAWS ($1,616 vs. $2,307 per ac-ft). In addition, it will augment the existing water resources in Texas. By doing so, it will help to alleviate the consequences of the relentless drought that the state has been experiencing for the last few years.

The authors of this proposal will travel to meet and interview a number of public water officials in Texas during the month of June, 2016. The Hopscotch Desalination plan will be modified, based on input from those officials, representatives from environmental groups (e.g., the Sierra Club), and other concerned citizens.  Also, a hydrologist will be employed as an advisor.

Based on information and advice collected during Phase 1, a detailed proposal will be prepared during the following few months and distributed to water officials, elected officials, media representatives, environmental groups, and concerned citizens.

If the Hopscotch Desalination Plan is accepted by officials for implementation, the authors will be available for consultations. Successful implementation in Texas could lead to later efforts to implement similar plans in places like Egypt.

By:  Manaugh&Majdi
Contest: Adaptation 2016
What can be done to prepare for and adapt to the impacts of climate change?
Follow on: