Solar powered aircraft equipped with solar cells covering its wing, it retrieves energy from the sun in order to supply power.

Solar powered aircraft equipped with solar cells covering its wing, it retrieves energy from the sun in order to supply power to the propulsion system and the control electronics, and charge the battery with the surplus of energy.

During the night, the only energy available comes from the battery, which discharges slowly until the next morning when a new cycle starts.

Solar panels, composed by solar cells connected in a certain configuration, cover a certain surface of wing or other part of the airplane (tail, fuselage,…). During the day, depending on the sun irradiance and the inclination of the rays, the convert light into electrical energy.

A converter, called Maximum Power Point Tracker, ensures that the maximum amount of power is obtained from the solar panels. This power is used firstly to power the propulsion group and the onboard electronics, and secondly to charge the battery with surplus of energy.
During the night, as no more power comes from the solar panels, only the battery supplies the various elements. A battery and a fuel cell both store energy in the form of reactants and produce power through electrochemical reactions in cells. Unlike a battery, which is self-contained (all its components for storing energy and producing power are within a sealed volume), the fuel cell stores one or both of its reactants externally. The energy capacity of a system using a fuel cell can be made larger simply by storing more fuel.

The fuel cell brings hydrogen and oxygen gases together in a controlled reaction to produce electrical power and water during nighttime. During daylight hours, electrolytic cells recharge the system by decomposing the same water (by electrolysis) into hydrogen and oxygen gases that are then stored at high pressure in tanks in the wing. The reactants are recycled each day. This type of system is called a regenerative fuel cell. The system can be designed to use separate electrochemical cells to create electricity and to electrolyze water, or to use the same cells to perform both functions (at a very small sacrifice in efficiency). The second type is a reversible system called a unitized regenerative fuel cell. 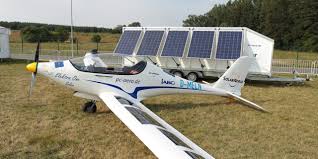 Solar Impulse 2 at a glance

Propelled only by the sun’s energy, the airplane Solar Impulse 2 sets out to demonstrate the promise of alternatives to fossil fuel.

The plane’s external dimensions feature a length of 21.85 m, a height of 6.4 m and a wingspan of 72 m. The wingspan, wider than a Boeing 747 jumbo jet, minimizes induced drag and provides a maximum surface area for solar cells.

The frame of Solar Impulse 2 is constructed with lightweight, thin materials, such as carbon fiber and honeycomb sandwich panels that reduce the weight of a carbon layer from 80 g/m² to 25 g/m², only one-third as much as a sheet of printer paper.

The plane’s upper wing surface is covered with high-efficiency solar cells and the lower surface is constructed with a high-strength, flexible skin, an innovation borrowed from techniques developed by sail makers for racing boats competing for the America’s Cup. The 140 carbon-fiber ribs are spaced at 50 cm intervals to give the wing its aerodynamic cross section and also maintain its rigidity. The aircraft features 17,248 monocrystalline silicon solar cells, each 135 µm thick and mounted on the wings, fuselage and horizontal tailplane, providing the best compromise between lightness, flexibility and efficiency.

Energy gained from the solar cells is stored in lithium polymer batteries optimized to have a density of 260 Wh/kg.

The batteries are insulated by high-density foam and mounted in the four engine nacelles, with a system to control charging thresholds and temperature. Their total mass amounts to 633 kg or just over one-quarter of the aircraft’s all-up weight.

The aircraft is equipped with four brushless, sensorless motors, each generating 13 kW

(17.4 hp), mounted below the wings and fitted with a reduction gear limiting the rotation speed of a 4 m diameter, two-bladed propeller to 525 rpm. The entire system is 94 percent efficient, setting a record for energy efficiency.

The plane climbs to 8,500 m during the day to gather as much sun energy as possible, and descends to 1,500 m at night in order to con - serve energy, coasting more like a glider, and therefore using much less stored energy from  the batteries than it would if it would keep a constant altitude.

Solar Impulse 2 began its attempted 35,000 km journey around the world in March 2015 in Abu Dhabi. By the time the mission is set to conclude in Abu Dhabi in July 2015, the plane will have made 12 stops – in Oman, India, Myanmar, China, the United States, and either North Africa or Europe ➔ 3. Flying at speeds between 50 and 100 km/h, the journey is anticipated to take 500 hours flight time, over the course of five months, crossing four continents and two oceans.

NASA has developed four solar powered aircraft:  the Pathfinder, Pathfinder Plus, Centurion and lastly, the Helios.

The Pathfinder is a lightweight, remotely piloted aircraft based on a flying wing design, meaning that it has no body or fuselage, just wings.  Its purpose is to demonstrate solar power technology as used in longduration, high-altitude flight.  Solar arrays cover most of the upper wing surface and provide power for the aircraft’s electric motors, avionics, communications and other electronic systems.  It also has a backup battery system that can provide power for up to five hours, which gives it a limited amount of flight time after dark. 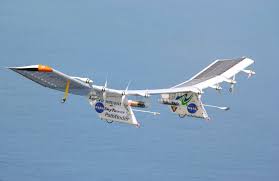 Pathfinder is slow in terms of modern aircraft, flying at an airspeed of only 15 to 25 mph.  Pitch, or the up/down motion of the aircraft, is controlled by the use of tiny elevons on the rear, or trailing edge of the wing while turns are accomplished by slowing down or speeding up the motors on the outboard sections of the wing. 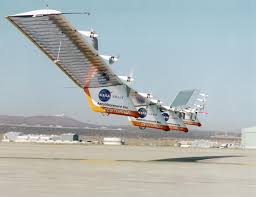 The Helios became NASA’s fourth design after seeing the performance gains achieved in the Centurion.  It has the largest wingspan of any of NASA’s solar aircraft at 75 meters (247 feet), which provided more room for additional solar panels as well as space underneath for electronics.

On August 13th, 2001, the Helios reached an altitude of 96,863 feet, a world record for a winged aircraft.  Not only did it break the previous record by 11,000 feet, it also spent more than 40 minutes at that altitude.  In addition, it was the first to use a hydrogen fuel cell to provide additional electrical power to the motors.

Unfortunately in June of 2003 the Helios suffered a catastrophic failure over the Pacific Ocean about 10 miles west of Kauai, when excessive turbulence caused the aircraft to exceed its designed speed limits and literally break apart.

Proposal cost will be depends upon the size of aircraft and it’s needs of energy . Solar cell unit cost $5.00 to $6 .00 per installed watt.

By:  Hira Pant
Contest: Aviation 2016
How can we design, operate, and power aircraft to reduce the climate impacts of aviation?
Follow on: