Focusing heavy investments from China to ramp up sustainable biofuel production can bring global costs down.

Reduction in global greenhouse gas emissions from aviation will not be easy. While there are many opportunities to increase energy efficiency, biofuel is the leading fuel option to reduce global greenhouse gas emissions. There are viable biofuel technologies, specifically the Fischer-Tropsch (FT) process and the Hydrotreated Esters and Fatty Acids (HEFA) process, that are well understood, certified under ASTM D1655, tested, and entering large-scale commercialization and use.

Yet there are undisputed challenges to biofuel development. Key logistics challenges are the integration of biomass feedstock supply chains with biofuel production. Key market challenges are uncertainty in future greenhouse gas policies and low petroleum prices. Land constraints do limit the potential for sustainable production of biomass for fuel. Within these constraints, biofuel can meet a substantial portion of aviation fuel demand.

A number of studies have estimated biomass feedstock availability; these numbers can differ widely depending on the types of feedstocks assessed and assumptions about competing for land uses. For the purpose of this proposal, we extrapolate globally the findings of the US Billion Ton study, as shown in Table 1. 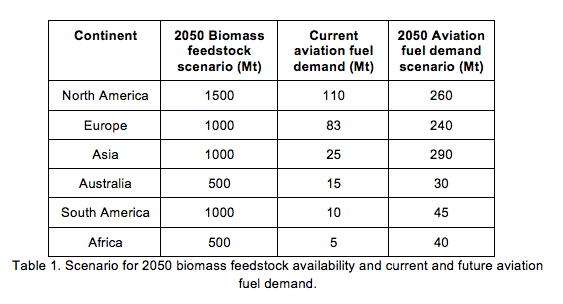 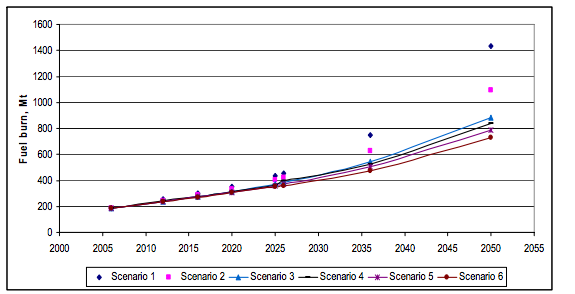 Figure 1: Scenario-based estimation of global fuel demand in the year 2050 by ICAO

We propose that one large country (the US, China, or Brazil) or coordinated region (e.g. the EU) intensely ramp up aviation biofuel production, along with associated coproducts such as diesel fuel, to a level of about 120 million tons of biomass by the year 2030.  We focus on the feasibility of the Chinese government to take up this initiative.

Emphasizing technology development for aviation biofuel within a country would result in gaining expertise in the most efficient pathway.  Plausible ways to develop a stable supply and demand for biofuel have been listed below:

To understand the scale-up challenge, we estimate that the current aviation biofuel production is 5 MT per year with a cost of production of $1/liter. As the cumulative production is scaled-up over the years, improvement in technology know-how and efficiency will contribute in decreasing the production cost. For a broad estimate, we consider the characteristics of a learning curve similar to that of the Brazilian experience with ethanol. The experience suggests that aviation biofuel price could directly compete with the conventional jet fuel (assuming jet fuel production cost to be $0.4/liter) when the cumulative fuel production by China and others reach 60 MT - 100 MT depending upon the learning rate. Assuming an annual increase in production, with the annual fuel production reaching 45 MT/year by 2030, cumulative production would reach 100 MT by 2025. Technology development costs would need to be externally supported through government incentives and mandates. 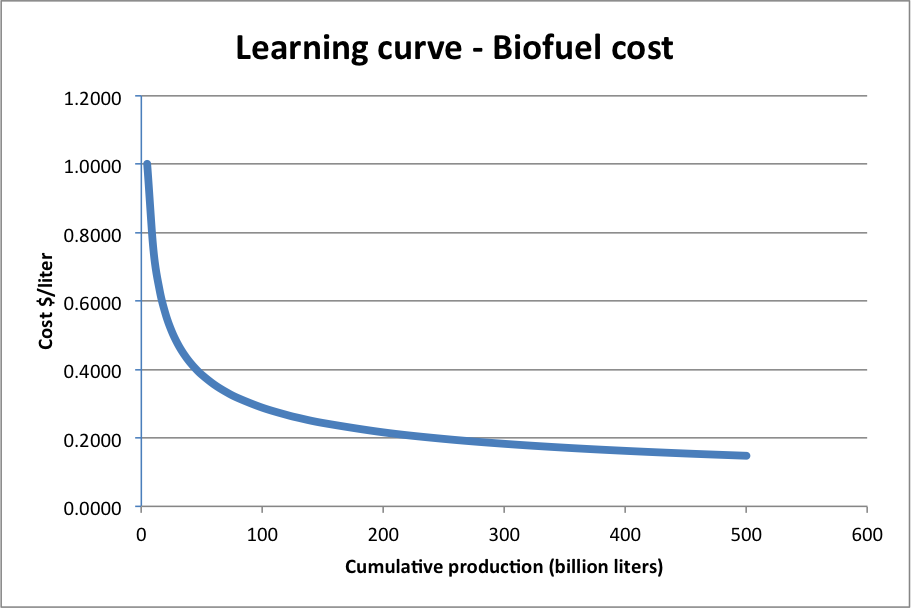 China has a cost advantage in possessing skilled and low-cost labor, substantial land area and suitable climatic conditions for feedstock development. Since second-generation biofuel technology relies on feedstocks that can be produced on marginal lands rather than prime cropland, it can avoid direct conflict with food production in the country. The main sources of non-edible lignocellulosic biomass include residues of crops or forestry production, and whole plant biomass. Biofuels obtained from vegetable oils produced from sources that do not directly compete with crops for high quality land also fall into this category.

The lifecycle impact of aviation biofuel depends on various factors including feedstock quality, conversion process and distance of transportation using conventional fuel.  A key factor that determines the cost of the biofuel and CO2e abatement is the emission caused due to transportation using conventional fuels in the supply chain.  Therefore, the production facilities can be strategically located closer to feedstock and/or delivery locations. The transportation variable can be controlled by implementing pipeline supply of biofuel from production facility to airports.  The option of transporting feedstock in the form of liquid or slurry can also be explored.

These actions could be taken by any large nation or in a coordinated region. We propose that China could take these actions. It has demonstrated strategic action in other energy technologies (large scale nuclear power plant production, large-scale investment in solar energy technologies and solar power), it has demonstrated capability in manufacturing and logistics, and it does not have domestic petroleum supplies.

These actions will be taken both in China and in other areas in which Chinese firms could establish biomass feedstock plantations with biofuel facilities, possibly developed as partnerships or with licensing agreements.  In addition to China these biofuel facilities could be established in other Asian countries, and in Africa.

Our approach is to consider an ambitiously high but potentially feasible investment and to evaluate its potential. In 2013 alone, China spent $56 billion on wind, solar and other renewables. Since 2003 global investments in biofuels has been about $126 billion. Estimates of requirements for aviation biofuel to meet European goals range from 10 billion to 70 billion euros. Considering these numbers together, we consider the possibility that China could make an investment in biofuels on the scale of its previous investments in other renewable technologies, that potentially could be sufficient to substantially affect the trajectory of biofuel technology development. Estimating that each 5000 barrel per day (0.3 Bl/y) facility will cost $500 million, investment in farms and supply chains for feedstock production could be approximately of the same magnitude. We propose a government subsidy of $0.5 per liter for production from facilities completed within the first three years, a $0.25/liter subsidy for production from facilities completed in the second three years and a $0.1/liter subsidy for production from facilities in the remaining 11 years. All of these subsidies would be phased out over several years to keep the total government expenditure within a total of $50 billion.

The proposed regional scale investment is over a 15 year period. This would be following in the medium-term by global development of aviation biofuel.

By:  Suriya Arulselvan
Contest: Aviation 2016
How can we design, operate, and power aircraft to reduce the climate impacts of aviation?
Follow on: