GASIFICATION THE WASTE-TO-ENERGY SOLUTION by naresh

Gasification can help the world both manage its wastes and produce the energy and products needed to foster economic growth.

According to the World Bank, the world currently generates about 4 billion tons of all types of waste per year. The world’s cities alone generate about 1.5 billion tons of solid waste per year. This volume is expected to increase to 2.4 billion tons by 2025. In lower income countries, waste generation will more than double over the next 25 years. Three-fourths of this waste is disposed of in landfills, with only one fourth being recycled. (“World Bank: What a Waste”, March 2012).

Faced with the costly problem of waste disposal and the need for more energy, a growing number of countries are turning to gasification, a time-tested and environmentally-sound way of converting the energy in MSW into useful products such as electricity, fertilizers, transportation fuels and chemicals. On average, conventional waste-to-energy plants that use mass-burn incineration can convert one ton of MSW to about 550 kilowatt-hours of electricity. With gasification technology, one ton of MSW can be used to produce up to 1,000 kilowatt-hours of electricity, a much more efficient and cleaner way to utilize this source of energy. Gasification can help the world both manage its waste and produce the energy and products needed to fuel economic growth.

Gasification converts MSW to a usable synthesis gas, or syngas. Gasification is a unique process that transforms a carbon-based material, such as MSW or biomass, into other forms of energy without actually burning it. Instead, gasification converts the solid and liquid waste materials into a gas through a chemical reaction. This reaction combines those carbon-based materials (known as feedstocks) with small amounts of air or oxygen (but not enough to burn the materials), breaking them down into simple molecules, primarily a mixture of carbon monoxide and hydrogen. 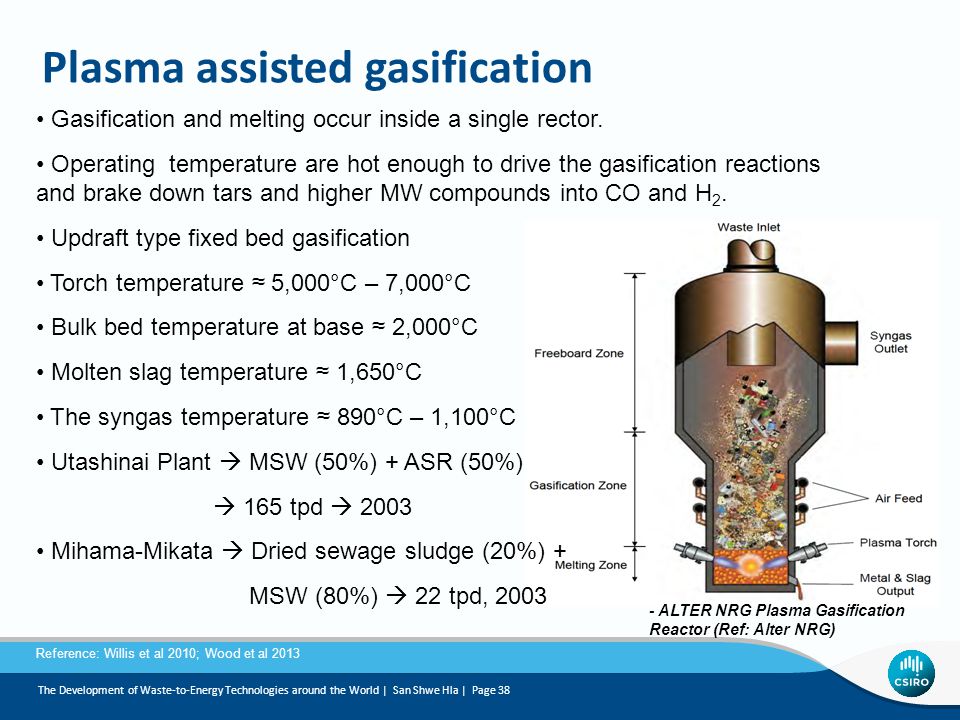 Plasma technologies have been used for over 30 years in a variety of industries, including the chemical and metals industries. Historically, the primary use of this technology has been to safely decompose and destroy hazardous wastes, as well as to melt ash from mass-burn incinerators into a safe, non-leachable slag.

Use of plasma technology for gasification is much newer. While other gasifier feedstocks, such as coal and biomass, are relatively homogeneous and easily gasified, MSW and other wastes are typically heterogeneous and may be difficult to gasify. The high temperature of a plasma gasifier initiates and supplements the gasification reactions, and can even increase the rate of those reactions, making gasification more efficient. The high energy input from the plasma arcs or torches can be easily increased or decreased as the quantity and quality of the MSW fed into the gasifier changes. The high temperature maintains the gasification reactions, which break apart the chemical bonds of the feedstock and converts them into syngas. Some MSW gasification systems use conventional gasification technology to convert the feedstock into syngas, and then treat the syngas stream with plasma arcs or torches to ensure the efficient breakdown of any unconverted compounds into syngas. The syngas consists primarily of carbon monoxide and hydrogen—the basic building blocks for chemicals, fertilizers, substitute natural gas, and liquid transportation fuels. The syngas can also be sent to gas turbines or reciprocating engines to produce electricity, or combusted to produce steam for a steam turbine-generator.

One of the important advantages of gasification is that the syngas can be cleaned of contaminants prior to its use, eliminating many of the types of after-the-fact (post-combustion) emission control systems required in incineration plants. The clean syngas can be used in reciprocating engines or turbines to generate electricity or further processed to produce hydrogen, substitute natural gas, chemicals, fertilizers or transportation fuels, such as ethanol. Instead of producing just heat and electricity, as is done in a waste-to-energy plant using incineration, the syngas produced by gasification can be turned into higher value commercial products such as transportation fuels,  chemicals, fertilizers, and even substitute natural gas. 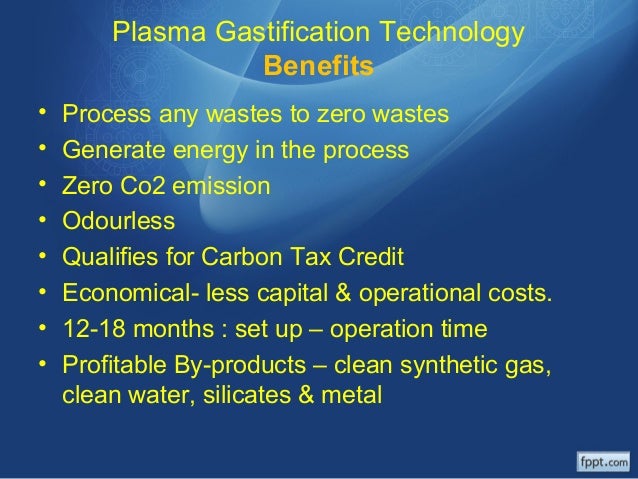 For every ton of Municipal Solid Waste processed in plasma plant, up to 2 tons of CO2 is reduced from the atmosphere.

Depending on type of plasma plants 2-5years baseline survey, 6-10 years plant installation and monitoring and 11-20 years evaluate the outcomes.