Protecting the building blocks of a society against climatic changes. by Team Green India

Farmers in the Punjab have always been facing climatic variability at intra- and inter-annual and decadal time scales. Over time weather-related disasters may erode the social and economic bases on which farming communities depend. Rural vulnerability to mental health problems is greatly increased by socioeconomic disadvantage.

Farmers are committed to suicide due to unseasonal rains. This include mostly marginal and small farmers. With no auxiliary source of income except agriculture, marginal farmers have to rely on credit to fulfil the significant amount of investment required for farm infrastructure and their daily expenses. Due to unseasonal rains and hailstorms, Rabi crops like wheat, cereals, mustard, vegetables (potato) have been damaged greatly. A look at the profile of the farmers who committed suicide due to unseasonal rains reveals they are mostly marginal and small farmers, with land holdings up to five acres, who had taken additional land on lease.

Agriculture in Punjab suffers from mono-crop culture of mainly wheat and paddy. With this cropping pattern, farming itself is becoming an unviable occupation, due to rising fixed and variable input costs, and low remuneration leading to falling profit margins. Variable costs increase due to rising prices of inputs like fertilizers, pesticides, weedicides, diesel etc. And further fixed costs like installation and deepening of submersible pumps due to the dipping water table increase the financial woes of farmers. For a small and marginal farmer, it is economically unviable to make such investments, especially by borrowing from informal sources at high rates of interest.

This could be achieved by providing insurance to the crop plantation by the government to the small-scale farmers and providing them with some sort of social assurance to help them re-establish themselves in case if they face any crop failure due to climatic impacts.

Introducing some sort of agriculture based studies will also be a great relive as more and more people will come to know the ways, pros and cons of different practices on the crop and the impact of climatic conditions on the crops which will help the society to understand the life of a farmer and educate about the same with the use of better technology.

Crop insurance can be described as when Agriculture is synonymous to disasters and risks beyond our control, then it is necessary to take precautionary measures to control damage faced by farmers. A crop insurance plan assists in the stabilization of crop production and reduces the negative impact it has on the lives of the farmers. Considering the current scenario, crop insurance has become a necessity for agricultural-related issues.

But yet in Punjab there are many issues with this system as at a larger level, it is the ‘one size fits all’ approach of successive governments that governs the situation. Due to which what a farmer in Punjab gets is “compensation” for the damage. But this mostly remains meaningless, as often the relief is Rs 5,000, or even smaller amounts, paid by the state government for losses of up to Rs 40,000-50,000 per acre.

So, it is very important to understand some of the benefits of crop insurance which can be stated as:

(i) Stability in Income: It protects the farmers against losses caused by crop failure. It acts like a tool that allows farmers to manage their yield and price risks.

(ii) Minimal Debts: Farmers are able to repay their loans even during the time of crop failure with the support of the right insurance partner.

Along with crop insurances some social assurances are also needed to be provided to these farmers so that they are more mentally relived in case of their social issues.

These are some of the social assurances that can be provided to the Punjabi farmers for their better uprising.

These assurances will lead to both financial and mental relief to the farmers and will help them to be more focused about their crop and different ways of protecting them from changing climatic conditions.

The above stated ideas can be implemented in the following ways:

Aadhaar is a 12-digit unique identity number issued to all Indian residents based on their biometric and demographic data. The data is collected by the Unique Identification Authority of India (UIDAI).

Linking the land area owned by the farmer and the region in which it is situated with Aadhaar card will ease the government for policy making and will also ensure no corruption while giving subsidies and other facilities whenever there is a crop failure. This data should be regularly updated, and it should be insured that no ill-means are being used by the farmers to represent their land in order to get the subsidies or other benefits. 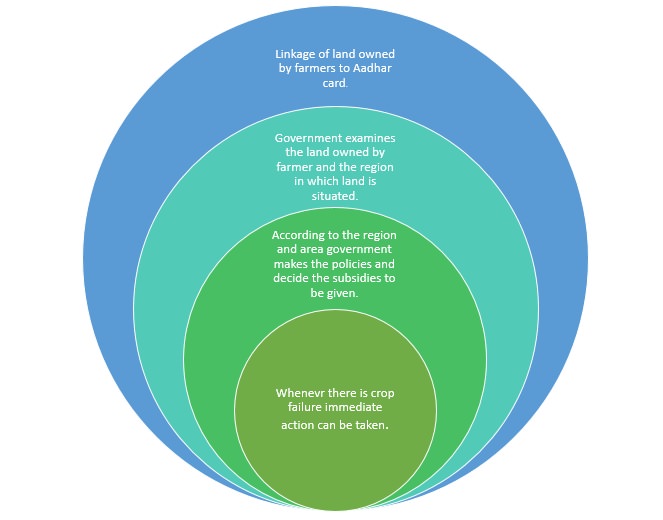 The above structure represents the working plan i.e. if the land owned by a farmer is linked to their Aadhar then the time required by the government to formulate policies is reduced and hence quick action can be taken.

So, this was the way that how the above stated plan will work.

It is very important that the farmers should know what new the government is planning for them and how these scheme and subsidies will affect them. But due to low literacy rates many of them are unable to get the direct profits of various government schemes.

In this way a large no of farmers can be introduced to different type of government schemes and thus they can find the best way for its application. 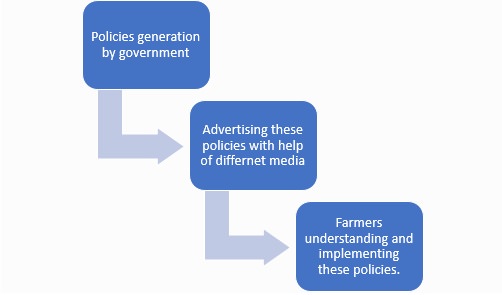 So, by this method the government plans can be transmitted to the masses, with help of which more and more people can be benefited by these plans.

It is a common practice in Punjab to use excessive fertilizers in order to boost crop production so as to cope up with the previous crop failure.

Due to this practice the quality of the crop decreases, and the farmer gets low price for their efforts.

So, the farmers should be introduced t the fact that using excessive fertilizer will neither be a help to the crop nor to them. Moreover, these fertilizers take away the nutrition content of the soil.

By this practice the society will tend to start understanding the farmers situation which will ultimately act as a boost to their self-esteem.

The government should formulate new policies according to the region and these plans should be further divided on the basis of land holding of each farmer.

Whereas the NGO's should work on the plan that all these policies are made familiar to the farmers so that they can take the most of its benefit. The NGO's should try to educate the farmers about all the new techniques and technology in agriculture field so that the farmers can change their farming methods and adopt new methods which will help them avoid the impacts of changing climatic condition.

The government should establish a new department solely for the farming purpose i.e. the changing climatic conditions and their impact on different crops so that the they can understand the trend in climatic changes and thus help to avoid crop failure to the maximum extent

These actions can be taken at the places where their are drastic effects on the crops because of changing climatic conditions due to which the farmers are being over burdened and live a miserable life.

2. Improved product quality due to use of new technologies.

3. Reduced crop cost due to protection of crops against different changing climatic condition and their better production.

4. Increase in overall economy of the system.

5. Better product satisfaction both for consumers and producers.

By:  Team Green India
Contest: Absorbing Climate Impacts 2018
How can climate risk insurance be linked with other forms of social protection to help vulnerable communities absorb climate impacts?
Follow on: