This proposal was moved here from Buildings Workspace 2016

Sustainable energy toolkit for slum upgrading projects. Toolkit is oriented to decision makers and customizable according to local needs.

Purpose of the Eco Slums flexible toolkit: to help decision makers see at first glance which energy efficiency and renewable energy options are available to make the slum more sustainable.

When doing research for this proposal, we did not find customized renewable energy / energy efficiency information for slum upgrading projects in publications by UN, etheir UN - HABITA or IPCC pages. So we think that many managers without extensive engineering knowledge will have easy access to information about the possibilities for saving money, energy and GHG emissions by using this toolkit.

We think that better results might be achieved if key decision makers are aware and / or take into account the 11 possibilities to save energy or generate renewable energy offered by the co Slums flexible toolkit. 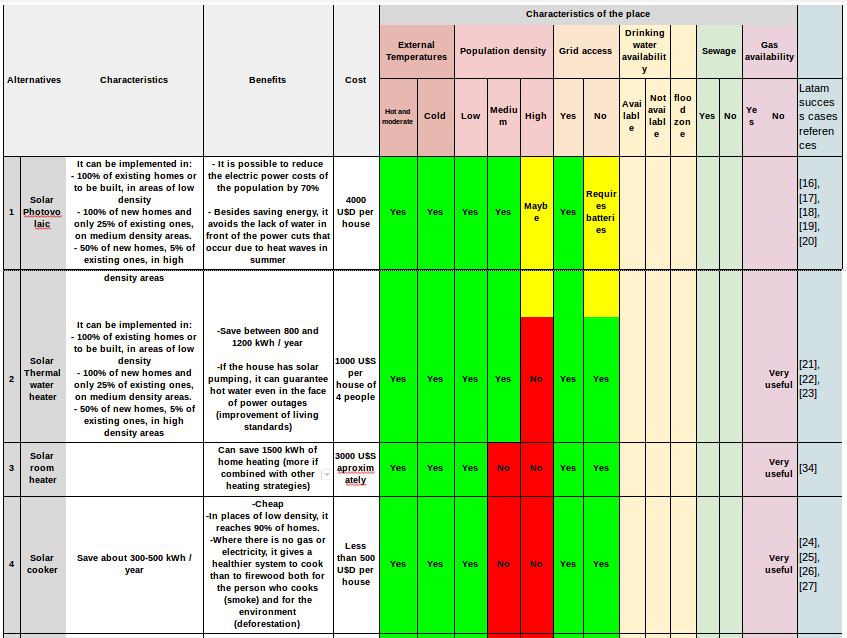 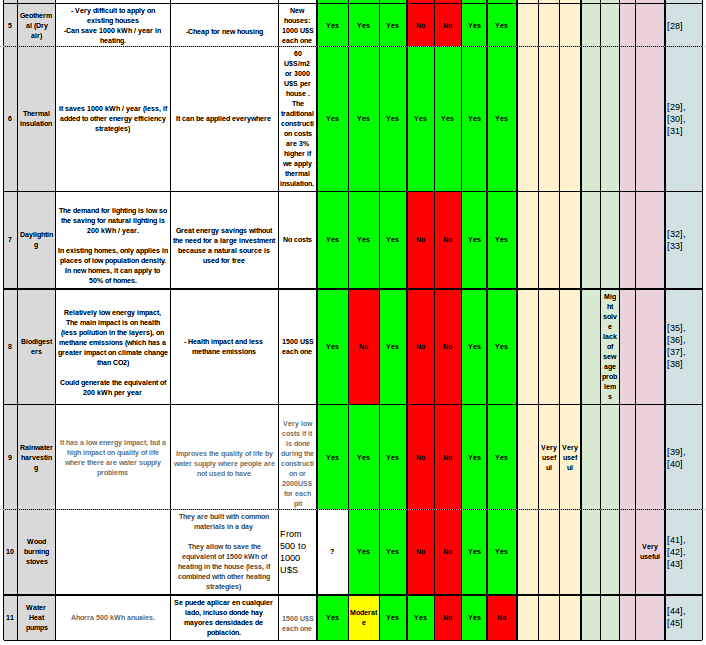 Expected benefits from the use of the toolkit:

World wide implementation of the toolkit would take 20 -30 years, and that by 2050 would save

The Argentine government is revamping a slum, building new houses or updating existing ones. Part of the project is improving energy efficiency adopting 6 measures that increase energy efficiency:

As energy is paid by the Argentine government, so up to 2050, energy savings may pay for 6% of the slum upgrading costs (see below).

As in the case of Argentina, either the local Government, or an NGO like “Techo” might implement slum upgrading projects.

CREATION AND MAINTENANCE OF THE TOOLKIT:

2)Non technical key decision makers will use the toolkit as a first reference in order to understand and take into account the possibilities that sustainable energy slum upgrading  has to offer, saving money, GHG emissions, and energy in the long run.

3)The maintenance of the toolkit would be done by slum upgrading managers, as well as key technology manufactures.

4)Project Information required by the toolkit:

a) number of people benefited by the project

b) number of refurbished or rebuilt houses

5) The maintenance of the toolkit perhaps would be implemented by the UN-HABITAT organization.

Many government around the world are doing Slum upgrading projects to improve the quality of life of about 1 billion people.

UN literature tackles issues like financing and change management, as many publications by UN-HABITAT show.

a) number of people benefited by the project

b) number of refurbished or rebuilt houses

However we did not find in the UN sites like IPCC or UN-HABITAT which were the best practices to be followed for energy sustainability best practices for renewable energies or energy efficiency.

Therefore we propose the "Eco Slum flexible toolkit" to be used by non technical key decision makers in order to understand and take into account the possibilities that sustainable energy slum upgrading  has to offer, saving money, GHG emissions, and energy in the long run.

As an example in order to calculate possible impacts, we take as an example the slum upgrading project recently done by the Buenos Aires city government.

Some of the problems present in the Buenos Aires city government slum upgrading project that were the following:

Poor structuring is the source of most of the listed problems, so working around it is key to improve the situation in slums. To do so, we propose two ways of action, both to be taken.

Buildings with access to the widest streets can be made much more efficient without a total reconstruction. Trucks can go through and collect their waste and ambulances can reach them, but they can also benefit from infrastructural reforms, like new waterworks, drains, sewers and street lights. To make these houses more efficient, the following was proposed:

In many places of the slums, the high density of the neighborhood makes it impossible for certain services to reach them, and the government cannot bring infrastructure improvements to the people living there. Removing  houses in these extremely packed zones would make room for new streets and make other houses suitable for remodelling, but that means that people must be relocated. If there is land available nearby, economical options do exist for new homes. Shipping Container Homes are a great option for this purpose:

The "Eco Slums flexible toolkit" might be applied by non technical decision makers all over the word as a first draft of the possible sustainable energy actions that can be done for the slum upgrading project, saving GHG emissions, money and energy.

As stated above, perhaps UN-HABITAT would house and maintain the toolkit.

The key roles that we identified where:

1) Electrical Home appliances & building industries, they would be directed involved in slum upgrading projects as purveyors of the technology.

2) Other country governments with slum upgrading projects that might use the Eco Slums toolkit, mostly in Latam, because success stories included in the toolkit are from Latam cases.

3) ONU might include the toolkit in its literature and actively foster its application for slum upgrading projects.

4) The slum's population, which must actively be engaged for the necessary slum upgrading project "buy in".

5) Other roles are the Climate Colab itself, the Kiri team, and peer reviewed journals where papers might be published. 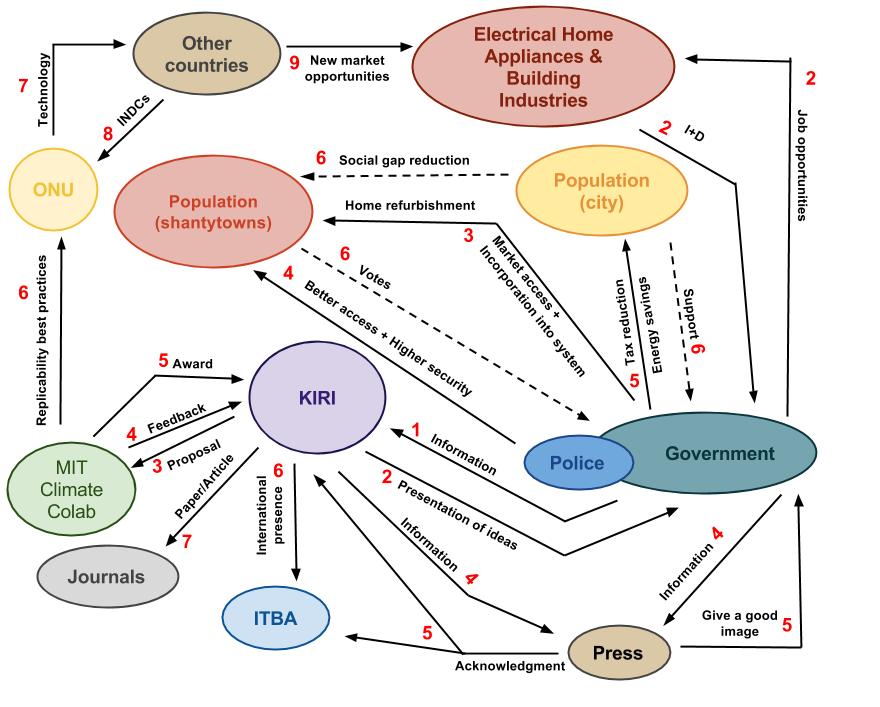 The "Eco Slums flexible toolkit" might be applied by non technical decision makers all over the word as a first draft of the possible sustainable energy actions that can be done for the slum upgrading project, saving GHG emissions, money and energy.

Taking account these variables, decision makers can see which technologies might be applied, and check they are appropriate for their own slum upgrading project.

Obviously, when going in the detailed engineering of the project, experienced engineers and architects will seek the best alternatives for the project. 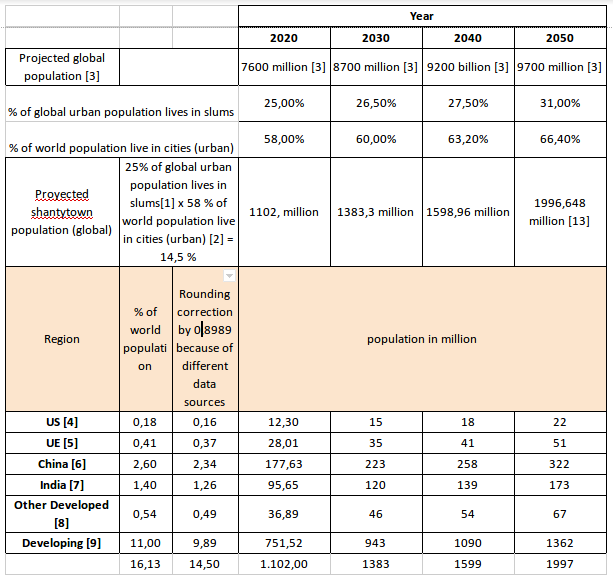 a) Table depicting the expected savings from the 6 proposed energy saving measures: 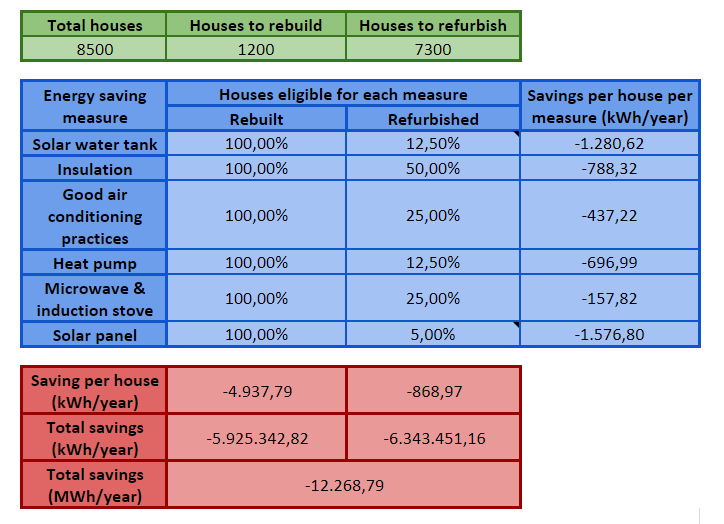 Projecting the diffusion of these measures worldwide following a typical diffusion curve up to 2050, and extrapolating these energy saving measures from the Argentine case to the world slum / shanty town population would result in: 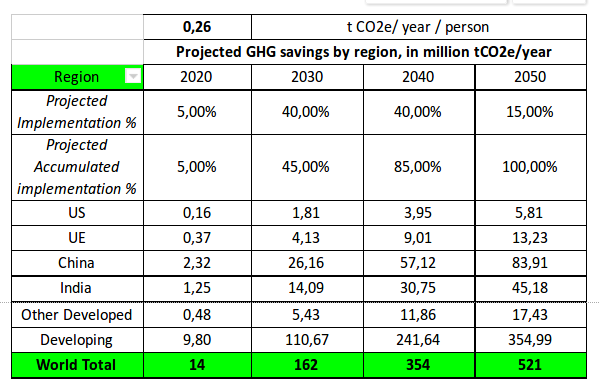 1) Projected worldwide USD savings from the implementation of the proposal 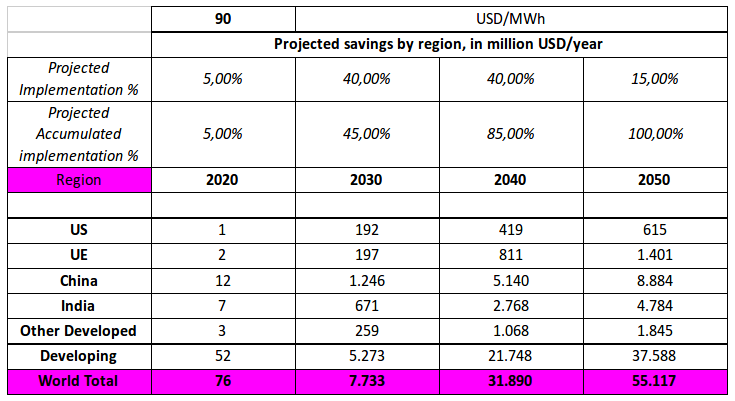 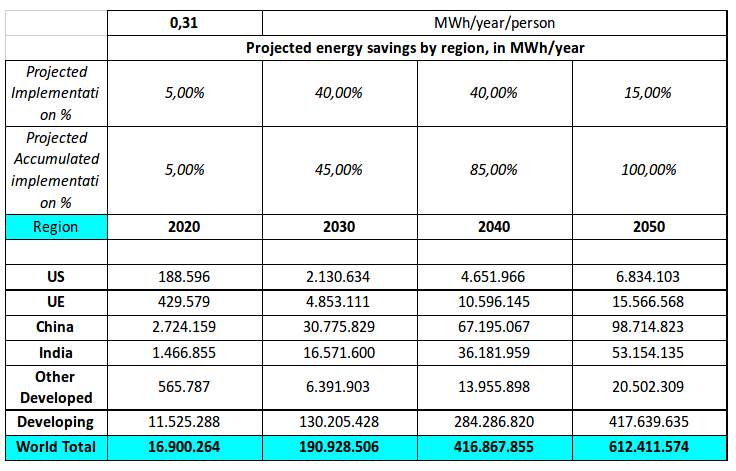 In those countries where the government pays for the electrical energy consumed by slums, resulting  savings may pay for part the revamping of houses and the slum.

4) Better quality of life for the slum inhabitants.

6) Better look and feel for the rest of city inhabitants.

Data from the Buenos Aires slum upgrading project tells us that the local slum's improvement project budget is 6874 USD / person.

As calculated above, we think that world wide implementation of the toolkit would take 20 -30 years, and that by 2050 would save

The amount of money saved, when the energy is paid by government, as happens in many Latam countries, would pay for upgrading houses for 1999 million people, the approximate  overall cost would be 6874 USD / person x 1999 million people = 13.714.000 million USD over 30 years.

May follow a Bass - diffusion model [14], typically a project like this could easily take 20 - 30 years, with the following timeline.

The Buenos Aires slum upgrading project had the following phases:

1) Design, change management and project evaluation: by architects, engineers, city officials and people's representatives in order to ensure the necessary - buy in.

It is critical to the success of an eco slum upgrading project that people living in the slum value, accept and help with the upgrading of the slum.

So it is important to warn that population about the changes that the house upgrading or rebuilding project changes that could be made and accept some of their ideas or changes that are needed. These actions will be no longer than one week.

The first and second week of this project, it is important to make a correct structural and functional analysis about the reforms to be made. Also integrate the proposals made by the inhabitants and what was seen in the tour of the place.

After doing this appropriate analysis of the area and its inhabitants, it is important to teach them how to improve their quality of life and how to take care about the environment and its importance (recycling, composting, pollution). It is really important to create a teaching method that takes into account their low level of education and their custom. )

One of the most important aims is to teach them how to take care of electricity so that, before three years of project start, the state will not have to pay their electricity bill no more.

The new households will be built with the new sustainable changes appropriate for the place.

Before the next four months of the start of the project, the existing housing will be reformed with the necessary adaptive changes that make them more sustainable in order to improve the quality of life of the inhabitants. 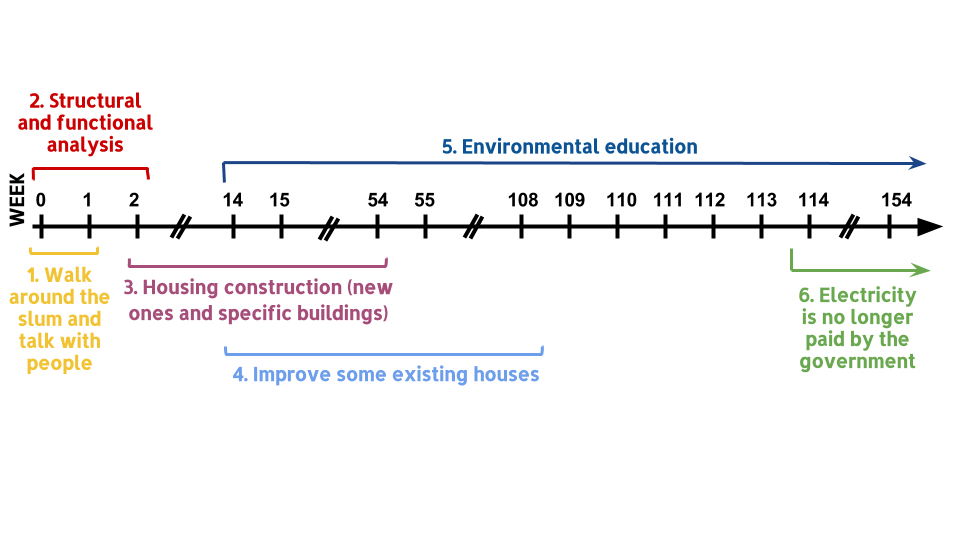 1. Nicolas Brown is an engineer, who studied at ITBA,  former 2016  Kiri Team Climate Colab Industry category winner, works for the Argentine government and works in the project.

5. Eduardo Fracassi, is an industrial engineer, who studied at ITBA,  former 2016  Kiri Team Coordinator and Climate Colab Industry category winner; and is a Climate Change Professor at ITBA.