Born from a grassroots movement to restore soil fertility in Karnataka, India, Jaya Organic Yojana (JOY) is a nonprofit organization that trains smallholder farmers in the production of organic compost through vermiculture, a composting process using agro waste and earthworms to make nutrient-rich fertilizer.  Since its inception in 2014, JOY has trained over 3,000 farmers who collectively produce over 27,000 tons of organic fertilizer annually.

When applied to farmlands whose nutrients have been depleted from the overuse of chemical fertilizers, a single ton of vermicompost can sequester up to .24 metric tons of carbon dioxide.  In aggregate, JOY’s growing network of farmers sequester 6,500 metric tons of carbon, annually. Furthermore, JOY farmers benefit from increased crop yields, savings on fertilizer purchases and through direct sales of vermicompost to other farmers.

JOY’s scaleable model is based on a “train-the-trainer” approach, whereby JOY personnel provide capacity-building seminars and equipment to local community stakeholders, who then train local farmers and Farmer Interest Groups (FIGs) to set up their own vermiculture operations. Farmers can either purchase equipment outright, qualify for a need-based grant or take out a microloan. After purchasing equipment and participating in a six-month training program at a cost of approximately Rs 28,000, farmers are typically able to produce over Rs 80,000 worth of vermicompost annually. 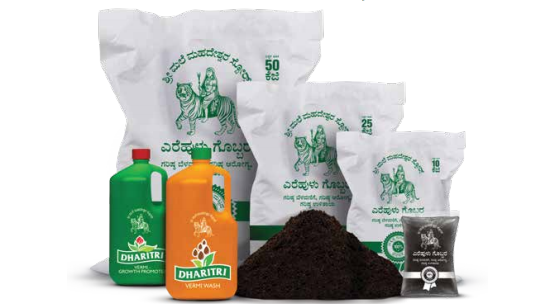 Affiliated with the Agricultural Skill Council of India and an accredited training partner of the National Skills Development Corporation of India, JOY is initiating operations in 2017 to include an additional 9,000 farmers across Karnataka, Haryana, Punjab, Arunachal Pradesh, Rajasthan, Madhya Pradesh, Maharashtra, Karnataka, Kerala, Tamil Nadu and Andhra Pradesh 2017. 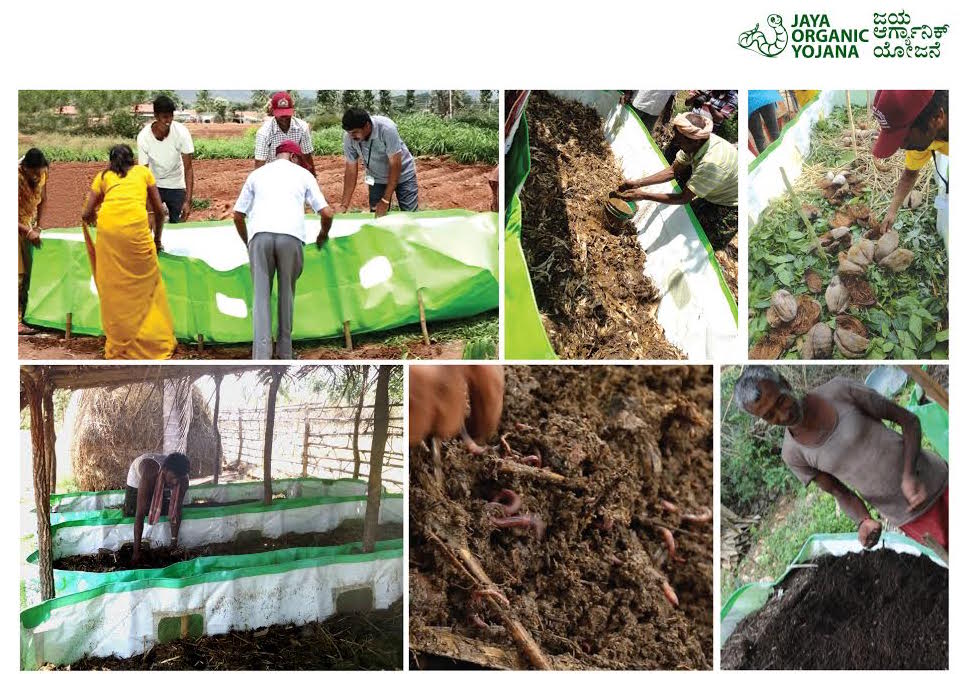 Across India, a combination of environmentally damaging farming practices negatively impacts soil, water and air quality, while also contributing to the release of greenhouse gases, and the long term diminishing of farmers’ livelihoods. These practices include crop burning, and the use of artificial fertilizers.

Though banned across several Indian states, the burning of post harvest crop residue continues to cause serious air pollution across rural and urban areas. This practice is not only dangerous due to the uncheck spread of fires and the negative health impacts associated with smoke inhalation, but it also releases carbon dioxide that could otherwise be sequestered through composting. A nation-wide crop burning ban could improve conditions, but increased enforcement would most negatively impact poor farmers who lack alternative waste management practices.  By offering credits to farmers who compost agro waste, on the other hand, policy makers could simultaneously address root causes of air pollution, while also increasing soil fertility, farmer livelihoods and carbon sequestration.

In the past 30 years, the overuse of chemical fertilizers - along with a reliance on monocrops and artificial pesticides - has reduced soil fertility by 50% in Southern India. Furthermore, the production of chemical fertilizers requires high inputs of fossil fuels, and the application of chemical fertilizers accounts for up to 80% of human-related emissions of nitrous oxide, without benefiting from carbon sequestration in soils where it is applied. Community-level vermicomposting, on the other hand, only requires the use of fossil fuels when transported long distances. While vermicompost, like any organic fertilizer, does release trace amounts of nitrous oxide, its application leads to decades of increased carbon sequestration, water retention and soil fertility.

The Indian state of Sikkim has taken a bold step towards banning the usage of artificial fertilizers and pesticides, and other state governments, such as Kerala, have introduced similar legislation. As a first step the government of Karnataka, where JOY farmers are already producing over 20,000 tons of organic vermicompost, should follow suit.  Thereafter, a nation-wide ban, coupled with subsidies on organic fertilizers that meet key government standards, would result in dramatic increases of soil fertility, water retention, smallholder crop yields, and an unprecedented level of soil carbon sequestration.

While vermiculture has been practised for millennia, efforts over the past several decades to drive large-scale adoption in developing regions has largely failed. JOY’s model has succeeded not only at the grassroots level, but it has also proven to be scaleable across India. JOY’s success lies in its community-engagement approach, which leverages a training curriculum - including audio, video and pocket-size lesson booklets - all in vernacular language. Beyond a simple “train the trainer” intervention, JOY provides ongoing support to trainers, who in turn offer one-on-one in-situ training to farmers and FIGs on their own land. Every week throughout the six-month training period, each beneficiary receives a personal one-hour visit from a trainer on site in order to troubleshoot, and provide additional lessons on environmental land usage, alternatives to crop burning, soil quality and organic farming.

Throughout this process, JOY works with beneficiaries to provide guidance on usage of vermicompost outputs. For farmers interested in selling vermicompost, JOY creates market linkages, along with marketing training and support. The majority of farmers, however, ultimately choose to use their product on their own land in order to increase crop yields, improve soil quality and save money on obsolete artificial fertilizer and pesticide purchases. In this case, JOY provides training on organic farming and productivity, while also creating market linkages for produce.

Having validated the sustainability and scalability of the model throughout Karnataka, JOY’s model is now being adopted and supported by multi-sector actors including Corporate Social Responsibility groups - such as General Electric - the Agricultural Skill Council of India, the National Skills and Development Corporation and the State Government of Karnataka. In terms of partnerships, next steps include gaining Voluntary Carbon Standard certification in order to sell carbon credits to corporations on the voluntary market. This will allow for long-term operational funding, while also providing a sustainable alternative to grants and loans for beneficiary start-up fees.

Unlike for-profit and multi-tiered marketing schemes, JOY does not push financing on its beneficiaries, nor does it receive any profit. Indeed, at an operational level, JOY is financed entirely by grants, CSR-supported funds, and private philanthropy. As a nonprofit organization whose mission is to restore soil fertility and improve environmental outcomes and boost the livelihoods of smallholder farmers, JOY has no interest in commercializing its operations, but rather is motivated to drive the widespread adoption of vermiculture across India for the aforementioned environmental and social rationales.

Key stakeholders of a successful, nationwide effort to increase soil carbon sequestration through vermicomposting include:

National government of India: to pass necessary legislation to ban crop burning and the usage of chemical fertilizers, while also offering credits to farmers who engage in sustainable composting practices, and subsidies of organic fertilizer producers. 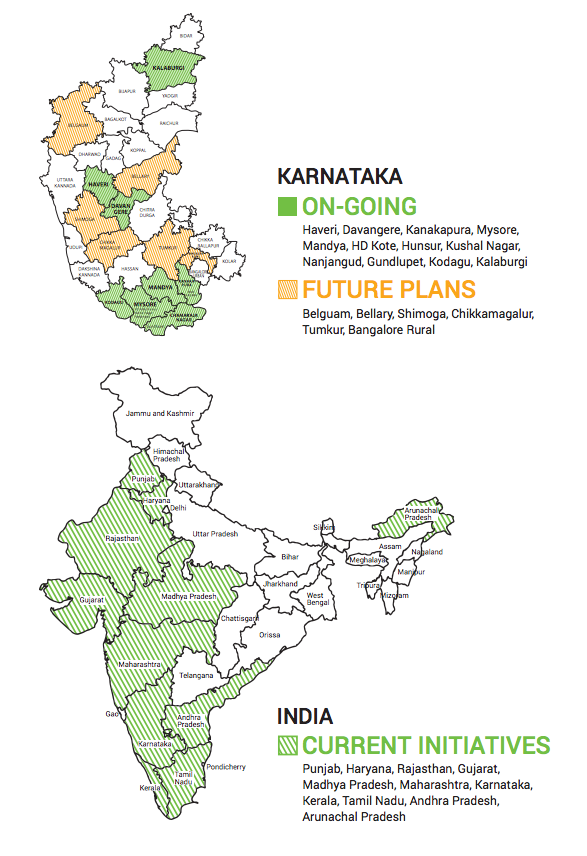 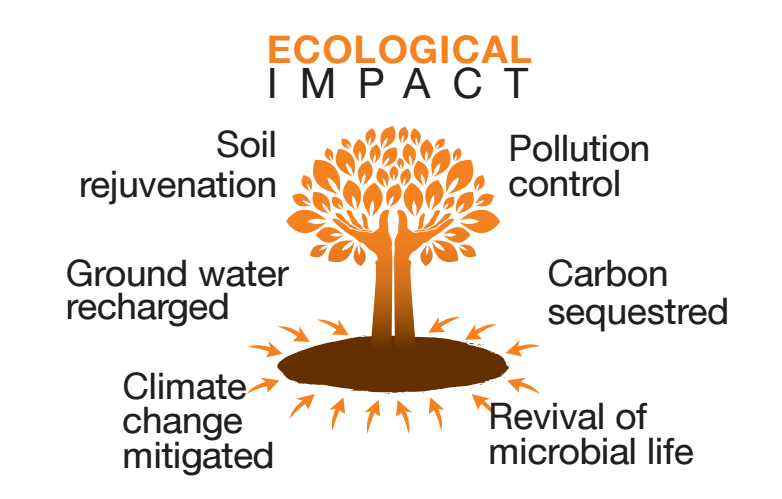 The application of vermicompost is proven to increase fertility, water retention and carbon sequestration in soil. Furthermore, value added products from the vermiculture process, such as “worm juice”, can be used as natural pesticides and plant boosters for flowering plants and fruits. JOY’s community-based business approach has lead to a number of documented social benefits. One major benefit - and often the most attractive to beneficiary farmers - is increased crop yield through the application of vermicompost. JOY has documented increased crop yields of up to 60% resulting directly from vermicompost and vermi value-added products. This includes an increased yield by 20% of sunflower seeds, a 40% increase in chillies, and a 60% in cotton.

In addition to higher yields, farmers immediately realize savings from the disuse of chemical fertilizers, which not only depletes soil fertility in the long-term, but also represents a costly expense for low-income farmers (approximately Rs. 20,000 per acre/year). Longer term, farmers benefit from increased soil quality, including an increase in microbial biomass and an increase in water retention capacity.

Finally, for those farmers interested in selling vermicompost and value added products - such as vermi wash and the worms, themselves - JOY creates market linkages to provide a minimum price of Rs 10,000 per ton of vermicompost. On average, JOY farmers are able to produce Rs 80,000 worth of vermicompost annually, with documented cases of over Rs 500,000 in annual sales for individual farmers.

In addition to these quantitative performance indicators, JOY farmers have also offered anecdotal evidence of increased wellbeing and a reduction of rural flight among youth. 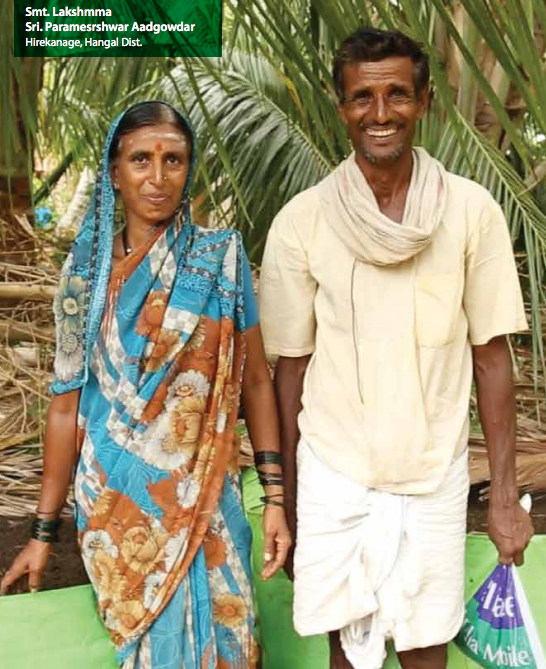 Nitrous Oxide emissions from vermicompost: trace as compared to other organic fertilizers

Éadaoin Ilten, TEL Operations Manager: Éadaoin holds a Ph.D. in Physics from University College Dublin, with an emphasis on advanced solar cell enhancement materials. Through her work with TEL, Éadaoin has led a multidisciplinary team of researchers across India and Myanmar with MIT’s Comprehensive Initiative on Technology Evaluation.

By:  Jaya Organic Yojana
Contest: Land Use: Agriculture, Forestry, Waste Management 2018
What initiatives, policies, and technologies can significantly reduce greenhouse gas emissions from land use change and waste?
Follow on: