Pyrolysis is used turn low value waste plastic into fuel in the form of gas, liquid & solid by heating them in the absent of oxygen.

Many cities does not has its won plastic recycling facility.  More often, it is not economically viable to recycle in cities of developed countries and it is easier for them to export their plastic waste to developing countries like China. However, it is getting harder and harder to export plastic waste and we need to come up with an alternative way to handle it.  Our plan is to build induction heated pyrolyisis plants in cities with low waste plastic recycling rate. Instead of sending waste plastic to landfill or incinerators, waste plastic will be send to pyrolysis plants and converted to fuel like diesel or gasoline. The diesel and gasoline can be consumed by local vehicles. Pyrolysis is able to accept a high variation of plastic types.

The conventional pyrolysis process with combustion heat source(oil, coal or gas)  is very energy intensive due to its low heat transfer coefficient. It is not economical feasible to invest or operate an commercial plastic pyrolysis without subsidy. Our purposed method "induction heated pyrolysis"  can improve the heating efficiency can be increased from 50% to 85% . Plus, the rapid heating property of induction heating, less dioxin is generated.

What actions do you propose? / Quelles actions proposez-vous?

The technology of pyrolyisis is an way to effectively reverses the plastics production process, where hydrocarbons are used to create plastics. Instead, the process cracks the hydrocarbon chains within the plastics, to produce distilled fuels. We will use the existing recycling system and network.

A schematic for prototype 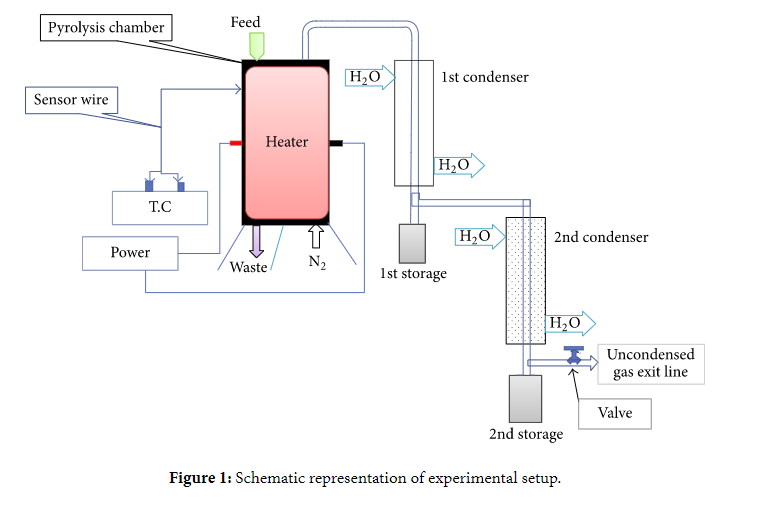 The plastic with high recycling value (ex. clear PET or transparent PE) will be baled and sold as raw material and recycled into plastic pellets again. Less value plastic, for example highly degraded ocean plastic waste, mixed muddy plastic waste and stryfoam will be put into pyrolysis reactor and converted to fossil fuel. There are three forms of fossil fuel will be generated Gas(ex. LPG ) Liquid (ex raw diesel) &  Solid (Coal black). The ratio of output products can be controlled by inducted heating temperature and types of catalysts used.

For general public, there is not much changes. However, for recycling operators, low quality waste with almost no value can now be considered as raw material of fossil fuel.

Governments of municipalities can provide incentives for companies to invest in building waste plastic pyloysis plants to improve waste recovery rate within the cities. Since induction heated pyrolysis facility has a relatively small operational footprint, it can be build close to industrial area in order to absorb plastic waste from factories.

Since pyrolysis system can absorb non-recyclable ocean plastic, governments or NGOs should sponsor fishermen to reclaim ocean waste plastic during restricted fishing periods. Since the fishermen are prohibited to fish, they can help cleaning up the ocean instead. The fishermen will be paid according to the weight of waste plastic collected and the duration of using fishing boats.

Scientists and engineers to improve the efficiency of the system, quality of products and safety and emission control of the process.

Government provides financial incentives for operators. Government can also encourage its departments and subsidiary to purchase the products (fuel such as diesel)

NGOs can provide subsidiary to fishermen in developing countries for collecting plastic waste. The NGOs can offer fishermen to buy whatever plastic waste they recovered from the ocean. It would provide fishermen to maintain a source of income during seasonal closures.

First start with several small scale pyrolysis system round the city. It can be place in recycling depots, next to industrial area or near a municipal landfill.

A small scale pyrolysis system (3 to 5 tons/day) a in recycling depot can help recover the degraded and unrecyclable waste plastic to diesel. The diesel will be used to fuel garbage trucks.

Larger plants (10 to 50 tons/day) will be setup in or near a landfill operation. Any unrecyclable waste plastic will be recovered to diesel which will be used to power garbage trucks and other operational vehicles and equipment.

We are also exploring the idea of hiring fishermen in developing countries to help collect ocean plastic waste. The fishermen will be paid and discounted diesel will be sold to fishermen as part of the rewards.

The process itself has very low emissions. Plastics are heated and then pyrolysed in anaerobic condition rather than being combusted. Emissions from the production facility are of the order of 10 times lower per tonne of waste treated than a incineration plant

Accorrding to Cynar, an UK based pyrolysis plant operator, they claim that their diesel product is cleaner than conventional diesel with a higher quality. Tests undertaken on the synthetic diesel produced by the Cynar process have demonstrated lower engine emissions of hydrocarbons and CO2 due the increased efficiency of the fuel.

Drivers have observed a positive change in their vehicles performance since opting for the End of Life Plastics fuel. This is due the higher lubricity of the synthetic diesel, reducing wear on engine components.

Another benefit of pyrolysis technology is the range of plastics it is able to accept, and in particular those plastics which are not deemed suitable or high enough quality for recycling, such ocean waste plastic and used food container.

Induction Heating pyrolysis has several advantages over the conventional heating methods of pyrolysis.

Incineration of plastic can generate high level of dioxin due to the present of oxygen in combustion. Indirect induction heating decompose plastic waste in a anaeroblc condition which oxygen is absent.

Induction heating has a high heating efficiency of 85%. It can reach targeted temperature in a very short time too.

Our objective is to utilize low value plastic waste:

Low quality plastic waste batch with high level of dust, dirt and sand contamination can be included in  the pyrolysis process without problem.

The cost depends on the scale of the project.

A induction heated pyrolysis system with the capacity to treat 300 kg of waste plastic per day, may cost a around USD $30 000 to $50 000. It can produce approximately 150 to 180L of diesel and ~40L of LPG and ~50kg of coal black. A small scale plant only take two workers to operate. It is a "turn key" system and easy to operate. However, it is not recommend since the scale is too small to be financially sustainable.

A plant with capacity 30tons of waste plastic can be profitable.

A pyrolysis plant with 30tons capacity costs around US$10M to $15 M to build. However, it can generate around USD$1M net profit a year. For such plant, it only takes 4 to 7 staffs to operate. Gas generated will be used toward generator electricity for the plant.

Selling fossil fuel are restricted or controlled by government in many countries. It can take a lot of effort to be allowed to sell diesel in some countries.

Coal Black is byproduct of plastic pyrolysis(~ 25%). It is commonly used for generating electricity in many countries. However, the demand of coal black has been declined since the world has shifted away from coal firing plants. Plus, many cities have restrictions on "coal firing". One of our focus of our research is to reduce the ratio of coal black generation in pyrolysis.

Another key focus of our research is to minimize air emission control. Induction heated Pyrolysis is very clean comparing to incineration. But in order to have our plants closer to residential area, safety will be the primary concern.

Pirry Leung: Experienced environmental professional from Hong Kong. He has extensive background on environmental monitoring, waste management technology and innovation on recycling. He is the founder of WoodLab Innovation, an environmental startup converting soya pulp (okara) to cat litter.

By:  Eco Refinery
Contest: Circular Economy, Economie circulaire 2018
What projects, initiatives, technologies or strategies can support cities in their transition towards a circular economy?
Follow on: