SAFELY ADDRESSING ADAPTATION ON A GLOBAL SCALE! by Johnnie Buttram

The World Meteorological (WMO) has reported that drought kills

and displaces more people than cyclones, floods, and earthquakes

combined . . making it the world's most destructive natural hazard.

In March 2007, when I was doing research on this Siphonics

. . innovation and solution was the cliche' and global warming

. . the words; adaptation and migration have replaced innovation

The global masses are becoming more and more concerned that

I recently read an article about John Bradfield, a credible man in

Australia, who in 1938 could find no one to listen when he called

for flooding the dry lake, Lake Eyre, so that evaporation would

68 years later in 2006, John Vidal of The Guardian reported,

It's now 2014, and desertification is on the move in places never

seen before or anticipated.

people today on our planet and most of them were children. What

The sad simple truth is . . if planetary leaders fail to think and act

big enough to return atmospheric moisture back to the

The United Nations just issued a report that stresses water

supplies, aggravated by climate change, are likely to cause more

conflicts, and that water should be considered as vital to national

Fourteen years ago at the age of 57, I told everyone who

would listen . . I believed we could have a better world by

exchanging the excesses of today for the essentials of tomorrow.

With our daughter and son being adults and no longer at home,

grid in the Kiamichi Mountains of Oklahoma.

We wanted to experience the challenges associated with

what Henry David Thoreau advocated when he stated,

When it was over 100 degrees F in the shade, there was

no electricity to power the AC.  We used propane to cool our

When our well was dry, we hauled water.

We used a solar panel to charge our phone and

But there is a peace and solitude, you feel when you have

a natural setting of howling coyotes about 30 feet from

your screened-in porch at night.

helped us overview, evaluate, and reprioritize our  lives to

All we had to do was purposely exchange those things we

had always taken for granted and retain the essentials.

was thrust into a situation where the essentials of food, water,

and shelter were no longer available . . the chaos of mass

migration in a lawless world could become a planetary nightmare of

In fact, this 10 year journey outside our comfort zone helped me

(3) Without food, water, and shelter . . there is MIGRATION

Seven years ago as a researcher and inventor . . I begin

the nucleus of an overlapping adaptation strategy designed to

Deserts, which consumes approximately (one/third) of the Earth's

surface - without water, are bastions for suffering and are basically

It been estimated that one CSP / Seawater Greenhouse (78 square

miles) located on the desert will evaporate approximately one million tons

of seawater per day.

The desert around Tucson, Arizona (USA) receives (12) inches of rain

per year.  However, this desert has the capacity to evaporate (100+)

inches of water per year.  Eight times more than received.

(ONE PERCENT) of the land mass and Thermal/Exchange potential

of the hot deserts of our world , in combination with seawater,

WILL EVAPORATE OVER (252) BILLION TONS OF SEAWATER 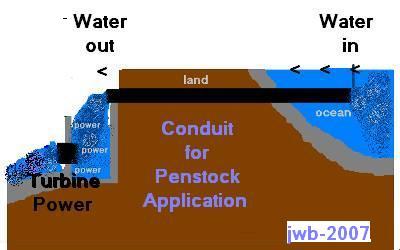 The "KEY" is to remove, replace, or usurp any strategic barrier

which separates UN-EQUAL Water / Land levels so that nature can

repair and heal itself.

O-W into / onto the desert land below sea level, we have the

opportunity to create the hydration to provide the essentials for

This process can turn barren uninhabited land into crops of saltwater

plants of cord grass, pickle weed, salt grass, and others which have

evolved mechanisms that will allow them to survive in saline conditions

to sustain a large variety of animals.

After years of desert irrigation from the ocean . . . pools of shallow

Deeper pools may be able to sustain the Mediterrean sea fish, Tilapia, as

they can survive saltwater to 44 parts per thousand.

At night, the evaporation condenses and falls back to Earth where

catchments, like fog fences and air wells, collect the atmospheric

days and especially ice and snow on mountain ranges. This run-off will

provide hydration for the innocent masses located between latitudes 35

When we remove, replace, or usurp any barrier that blocks the

level, the #1 objective of this solution hinges on the engineering

tweak or make an adjustment.

The power-ends extend inland below sea level and contain manual

or automated, canal gates for safe , open, shut, and adjustment

Water flow management and adjustments will be made under the

direct focus of the environmental impact director and staff, who

are in charge of coordinating climate impact data retrieved by

world-wide consultants and host country universities of each 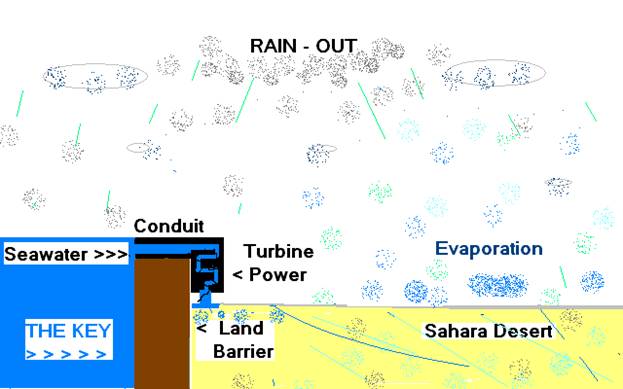 individuals concerned about the welfare of everyone on Planet

A Global application would consist of (nine) deserts and (eleven) teams.

(Nine) deserts will have (one) team, the Sahara Desert would have (two)

Please note; The above deserts and applications are flexible and subject

to change upon more discovery.

Will these deserts fill up with too much water?

Most deserts sometimes have sand &/or gravel, etc. one hundred feet

before reaching a bottom to substantiate water flow.

To shut off water flow from the sea . . (SNE) has the engineering option

to safely, open, shut, and make adjustments of the conduit gates 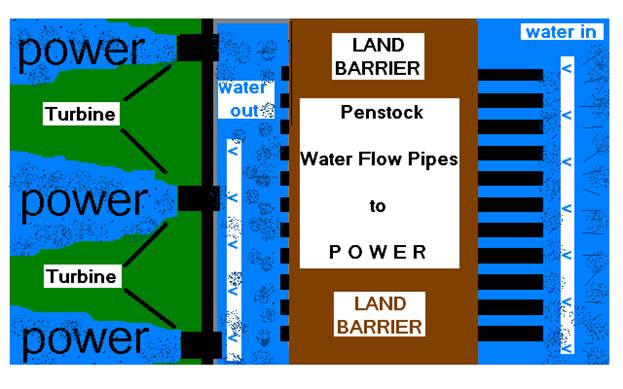 into / onto the desert lands below sea level where each conduit

becomes a penstock that powers Hydro-Electric Turbines to

provide NO CARBON ENERGY to the masses. 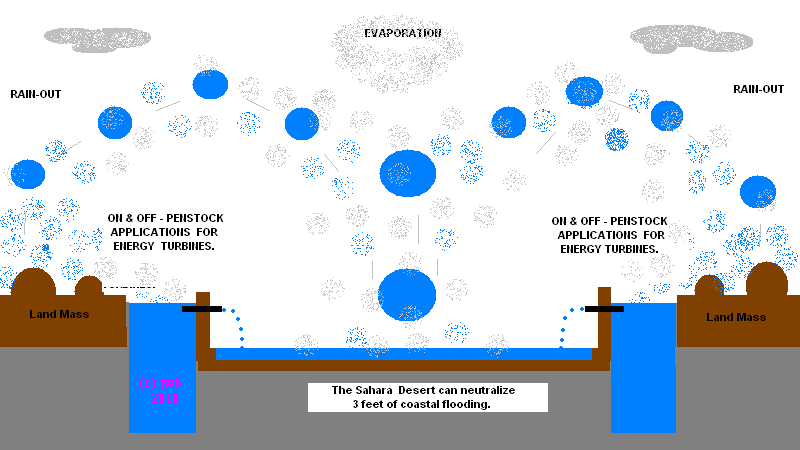 The National Climate Assessment report believes our planet may

Many top engineers and climate experts agree the Sahara Desert

alone contains the holding capacity to absorb (one) meter + of sea

million residents will be exposed to coastal flooding with lost

The objective, if possible, is to lease all equipment and contract

As an example ; we could use the easier to handle "72" inch

diameter polyethylene pipes at a approximate cost of $320 per

manufactured by weholite in the UK.

thousand tons of water per day.

These "72" inch pipes, connected together, will extend far enough

They will be screened, buttressed, and secured with concrete and

Each of the (11) locations will contain (100) penstock applications.

When fully operational, each (100) penstock location will have a

flow capability of (50) million tons of water per day.

The Sahara project will contain (2) locations of (100) penstock

applications per operation. This (200) penstock flow capacity upon

the Sahara will be approximately (100) million tons of water per day.

The total flow capacity of (1100) penstocks on (10) desert locations

on Planet Earth, has the Thermal / Exchange potential of (550)

million tons of sea-water to atmospheric moisture per day.

equal (ONE PERCENT) of the land mass and Thermal / Exchange

potential of the hot deserts of our world.

applications installed on the (9) hottest deserts of the planet for $

frivolity that drives us apart . . and act before the International impact of

drought - food - and water supplies directly impact those within their

Planetary leaders, who fail to appropriately address this delicate variable

time frame, may sadly witness a massive die-out of those within their

I, sincerely, believe this Seawater / Desert / Evaporation to Rain-out

Proposal contains the potential to;

(b) Provide no carbon energy.

(c) Provide food and water for the masses.

(d) Recycle over and over to sand filter our polluted oceans.

The fine Line Between Adaptation and Migration!

The Fine Line Between Adaptation and Migration!

Additional information concerning polyethylene conduits may be found at . . .

declining to be connected, and choosing the indecision of

business as usual, Planet Earth will inevitably succumb to our

We must seek the greater good as caretakers of Planet Earth.

By:  Johnnie Buttram
Contest: Adaptation to Climate Change 2014
What can be done to adapt to the impacts of climate change?
Follow on: