Coastal Reef, Barrier, and Fish Development on a Shoestring Budget! by Johnnie Buttram

from the atmosphere into organic carbon during photosynthesis.

Although they make up less than 1% of the Earth's biomass,

phytoplankton is responsible for roughly half of the Earth's natural

dioxide to become so concentrated in seawater that our coral

reefs are dying at a rate that requires great alarm and urgency.

In fact, many officials predict that up to half of the world's coral

reefs may die within the next 40 years . . maybe even sooner.

We desperately need a solution that will restore our oceans'

According to Nabil Ismail, Professor of Coastal Engineering at the

University of Hawaii at Manoa, stated that super storm Sandy sent a

and urban shorelines, estimated at $70 billion in damage.

Also, according to author, Donna Conneely, "Flood Losses May

For example; the yearly cost of flooding in New Orleans is

in the US each year. 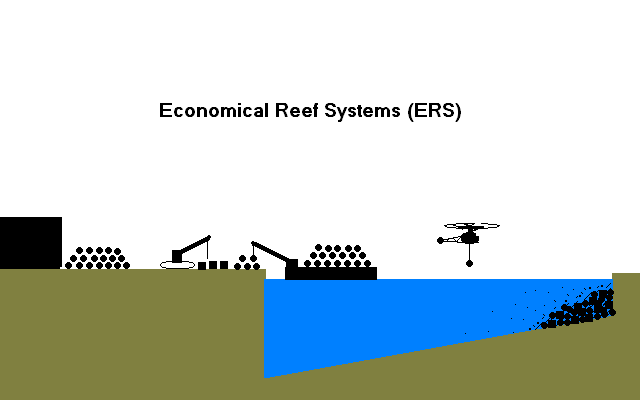 products right off the shelf.

Here's how it works;

1) Oceanographers will designate the oceans' areas that are being

severely impacted by the destruction of our reefs and coastal

will be machine perfed with small holes and shipped direct from

the best price manufacturers closest to the designated site.

(4) The barrels will be loaded on barges, etc. or flown to drop sites

of coastal infrastructure close to the shoreline may be better

addressed using equipment from the land - side rather than from

configurations, so fish and sea life can use the nutrients inside to

Using action and ingenuity, we may create viable economical

substitutes in thousands of impacted locations, to add beneficial

processes to our oceans' ecological system.

Applications will be on - going on thousands of locations all over

I believe, through action and ingenuity, we can create viable

economical structures that will not only reduce the residual fallout

of our dying reefs . . but through focused infrastructure in

thousands of impacted locations, add a positive and beneficial

process to our oceans' ecological system.

protection against coastal flooding and erosion.

According to research, the approximate cost of an engineered and

constructed seawall, designed to reflect and scatter ocean energy, will

The approximate cost of a low-end buffer boundary to reduce

Boulders will run around $150 USD per lineal foot.

Costs will vary contingent on the vertical height of the wall

hundred dollars to huge amounts contingent on what needs to be

accomplished on each location.

This project is multi-faceted with overlapping benefits at an

Progress begins when one individual has a simple discussion with a

friend about their abilities to make a difference.

Action begins when they have a discussion about a possible solution.

Based upon the final decision to move forward . . some small

scale applications could be in monitoring positions within 90 days.

Adaptation to Climate Change,"SAFELY ADDRESSING ADAPTATION ON A GLOBAL SCALE!"

. . . Adaptation . . . The Fine Line Between Adaptation and Migration!

10 Years of Adaptation Using the Essentials of Food, Water, and

Fourteen years ago . . I was 57 and telling everyone who would listen . . I

today for the essentials of tomorrow.

home, I persuaded my wife (a retired teacher) to help me build a small

cabin off-the-grid in the Kiamichi Mountains of Oklahoma.

took for granted and retain the essentials.

We moved into our cabin with the ESSENTIALS OF FOOD, WATER,

There was no electricity, no AC. We used propane to cool our food,

cook, and heat. When our well was dry, we hauled water.We used a

solar panel to charge our phone and computer batteries.

Due to labor intensity, health issues, and the lifetime teaching skills of my

wife who repeatedly reminded me that living ourside our comfort zone

was more of a challenge than what I had anticipated . . we moved back

I immediately turned on the AC - took a long shower and went to bed.

a situation where the essentials of food, water, and shelter were no

longer available . . the chaos of mass migration in a lawless world could

become a planetary nightmare of life and death.

As a researcher, I viewed this 10 year journey as an opportunity to

help me to evaluate three realities!

(3) Without food, water, and shelter . . there is MIGRATION and

Seven years ago . . when I realized Planet Earth will desperately need

bare essentials of food, water, and shelter . . I have devoted a sincere

and concerted effort to this cause.

By:  Johnnie Buttram
Contest: Communicating Coastal Risk and Resilience 2014
How do we best communicate climate risk and resilience to coastal communities?
Follow on: