Photovoltaics (PV) is the name of a method of converting solar energy into direct current electricity using semiconducting materials that exhibit the photovoltaic effect .Many campuses are installing photovoltaic (PV) solar electric arrays. PV becomes more cost-effective when conventional electric rates are high and ample incentives are offered by state government or local utilities. To achieve climate neutrality or deep cuts in GHG emissions, campuses will need to transition as much as possible to carbon-free renewable solar energy technologies.

Solar photovoltaic technologies convert solar energy into useful energy forms by directly absorbing solar photons—particles of light that act as individual units of energy—and either converting part of the energy to electricity (as in a photovoltaic (PV) cell) or storing part of the energy in a chemical reaction (as in the conversion of water to hydrogen and oxygen). 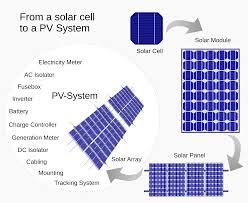 Solar cells are generally very small, and each one may only be capable of generating a few watts of electricity. They are typically combined into modules of about 40 cells; the modules are in turn assembled into PV arrays up to several meters on a side. These flat-plate PV arrays can be mounted at a fixed angle facing south, or they can be mounted on a tracking device that follows the sun, allowing them to capture more sunlight. For utility-scale electricity generating applications, hundreds of arrays are interconnected to form a single, large system. 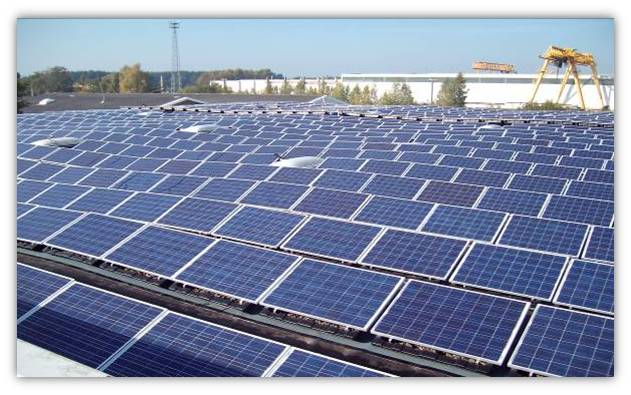 Concentrated PV (CPV) systems concentrate sunlight on solar cells, greatly increasing the efficiency of the cells. The PV cells in a CPV system are built into concentrating collectors that use a lens or mirrors to focus the sunlight onto the cells. CPV systems must track the sun to keep the light focused on the PV cells. The primary advantages of CPV systems are high efficiency, low system cost, and low capital investment to facilitate rapid scale-up; the systems use less expensive semiconducting PV material to achieve a specified electrical output.

The amount of available sunlight is another important factor though PV can work well in all areas. Where there is less sun, compensate by adding panels to meet a given load. This adds cost and stretches out payback but it works.

Obviously, the amount of available sunlight is another important factor though PV can work well in all regions. Where there is less sun, more solar panels are needed to meet a given load. This adds cost and stretches out payback but it works. Where snow may cover panels during winter months, panels can be tilted to shed snow or PV array output can be pro-rated downward to allow for a number of weeks or months when output is reduced. The performance of grid-interconnected PV is generally measured in terms of annual power production and most PV production occurs during the sunnier summer months when days are longer and there is less cloud cover. In areas where winter days are cold and clear, angling panels to take advantage of those conditions becomes more important. While winter output will be less, PV panels actually have a higher sunlight-to-electricity conversion efficiency when cold.

Viewing Google map MIT buildings have free terraces available where exposed to sunlight many hours per day that can be used to install solar collectors. At, first MIT should study feasibility study of the amount of energy required to operate all equipments as well as to calculate total amount of the budget required for installing solar energy on campus with the help of the solar installation companies. Then, MIT campus administration developed a plan for getting sources of the necessary funds to implement solar technology.

There are a variety of financial models for installing PV on campus. MIT can design, purchase and install its own system – typically with the technical assistance of a consultant or supplier. The relatively high cost and long payback of this kind of investment can be tempered by incentive dollars that reduce the initial or “first cost” of the system. Another financing strategy is to include the cost of the solar energy system in a larger self-financing energy conservation program and, in essence, allow the energy conservation measures (and the dollar savings they produce) to pay for the solar.

A solar energy system can be installed on campus through a power purchase agreement (PPA) with a renewable energy power provider who will install and own a PV system located on campus. A PPA will oblige a campus to purchase power from the PV system for a number of years at rates established by the contract. The primary advantage of this arrangement is that the campus is not responsible for the installation, operation, maintenance, or cost of the PV system. Also, this arrangement may allow the energy supplier to take advantage of tax credits which may not be available to the campus.

Maximum output from PV arrays occurs mid-day on hot summer days – precisely the time when regional grids in many areas are under strain because of high air conditioning loads. At these times, hourly rates for electricity may be much higher than average rates. This coincidence suggests that an analysis of PV cost-effectiveness should be sophisticated enough to factor in the additional dollar savings associated with avoiding that very expensive conventional electricity. PV arrays can also reduce peak demand and peak demand charges. PV project simple paybacks tend to be long though factoring in these additional savings will shorten it somewhat.

In order to claim a CO2 reduction from a campus-owned and operated PV system or from a PV PPA, you must own the renewable energy certificates or RECs associated with the output of your system. In the case of a PV system campus owns, that means “retiring” and not selling them. In the case of a PV system installed under a power purchase agreement, to claim a CO2 emissions reduction campus must buy the RECs produced by the PV system. The REC purchase may be in addition to buying the actual power produced by the array.

1 to 2 years manufacturing and installation of solar panels