Small gatherings in people's homes each of which generates more, allowing deep, transformational engagement at an exponential scale.

A host, invites friends to their home. A trained volunteer presents information, tells stories and facilitates discussion about climate change, solutions and what individuals can do that is most effective. The conversation is designed to connect the facts with their values and what they care most about. At the end, we ask:

We also seek to recruit new volunteer facilitators at gatherings and elsewhere to keep up with the exponential growth built into the model. 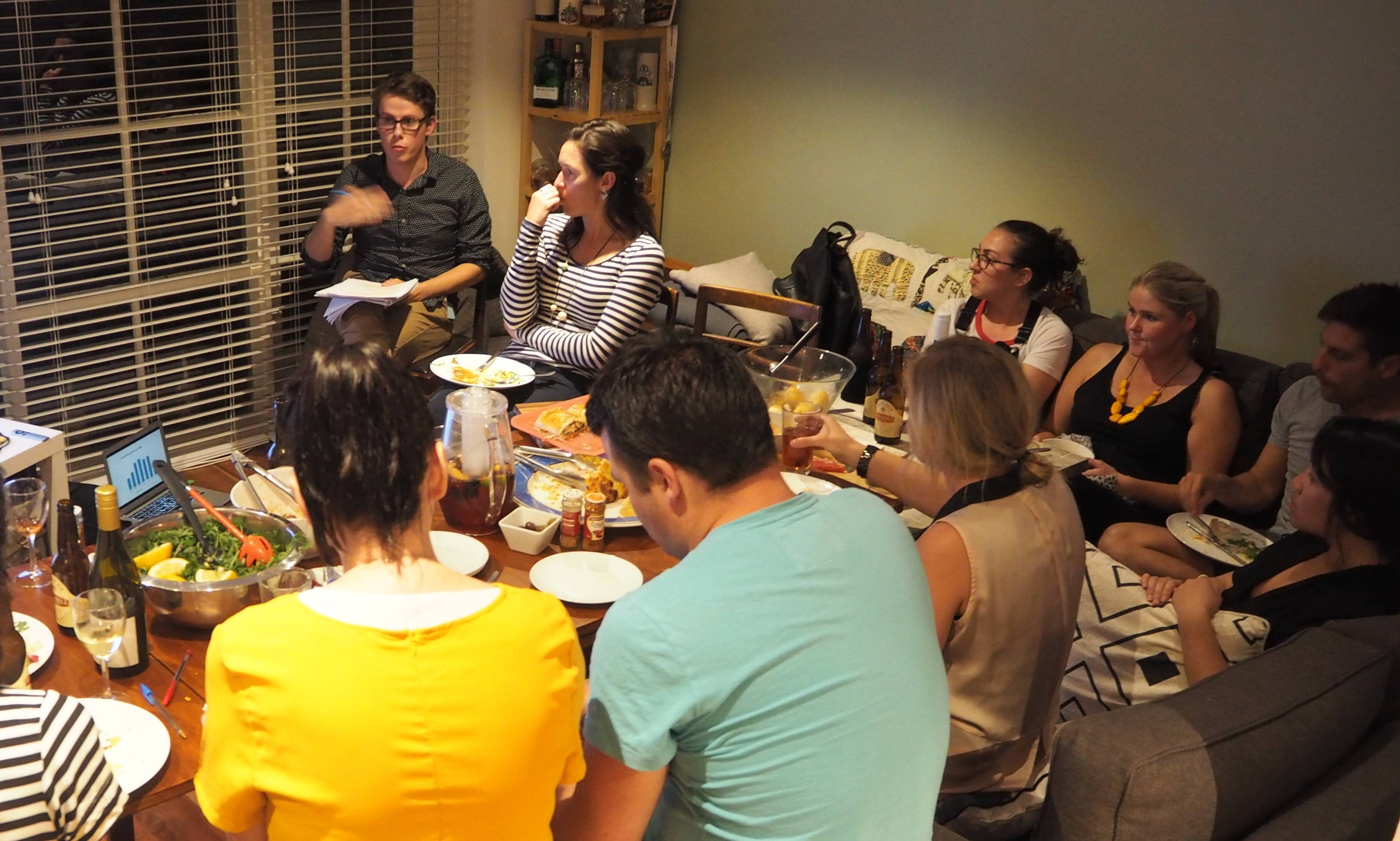 **Communities for Change will work to create the climate for change we need for effective action on climate change within different communities. Communities will generally be locally based, but can be ethnic, religious or around any other point of common interest.

Each Community will have a webpage. Once joined, members will be publicly listed (anonymously if they wish) on that page as a visual representation of the size of the community and its ongoing growth.

Community members then seek to sign up friends and family to their community, who then commit to signing up their friends and family and so on. We report the growing numbers in each community monthly to local political candidates, business, industry and other leaders and the media. We report leaders’ responses back to the communities.

Each community will be supported by a community organiser who helps members to find the best ways for them to act and reach out to others, then supports them to do so with resources and trainings. The community organiser connects community members and updates them all on what everyone is doing. Activities and engagement will be designed to move people to greater commitment and collective action with many opportunities to join/support existing groups and campaigns. 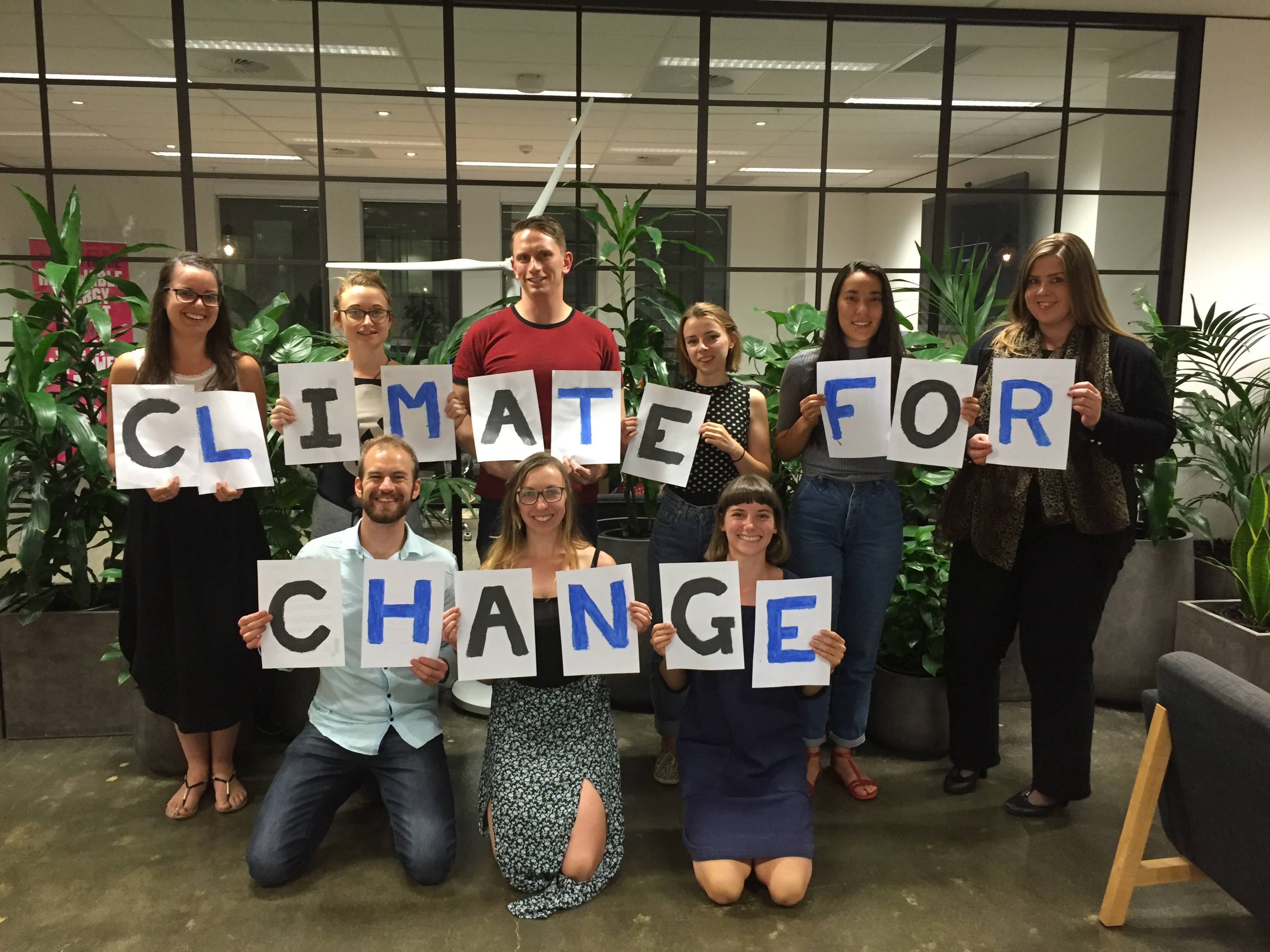 Actions are designed to create the social climate for effective action on climate change - to make such action (action that keeps warming well below two degrees) a social norm.

Social research tells us people absorb information from mass media, politicians, experts etc, but it’s not until they have conversations with people they know and trust that they process that information and decide what to make of it - how seriously to take it and how they will respond. It also tells us that it is not conversations about the facts of the problem that are persuasive, but ones about values, how we feel and what we are doing about it.

Our key focus is therefore to support ordinary people (non-experts) to have productive conversations about climate change with people who know and trust them. We do this by providing training, resources and mentoring to help people:

Our project is aimed at politicians and other leaders who are in a position to enact the massive system changes we need to stop climate change in time, but the key actors in our project are everyday citizens. Our goal is to create such a groundswell of demand for effective action that our leaders have to respond.

Social Diffusion Theory tells us that new ideas and movements pass through societies, starting with a small number of people (innovators) then through to a larger minority (early adopters) until they reach a critical mass (early majority). The key to mass uptake of an idea is the early adopters. We therefore work with early adopters to support them to act and have conversations with people who know and trust them in the early majority.

With regard to climate change we define:

Roles in the project are:

We have crowdfunded to start already in Melbourne, Australia. Our goal is launch Australia wide in early 2017. Our aim is to make the model ‘franchisable’ so that it can be launched anywhere and scaled up quickly. We’d love to see Conversations for Change spark Communities for Change all over the world!

In Australia, our focus will be to target strategic electorates (marginal/swinging or ones where we can force a commitment from an influential politician or other leader so as to make effective action on climate change the key to whether a party can win government.

Our goals are not around emissions, but reach.

Our mission is to create the social climate in Australia for effective action on climate change by 2019 (our next federal election). This would be manifest in all candidates for election being committed to actions consistent with global warming well below two degrees and competing to have the best policies to get us there - including adequate contributions to the Green Climate Fund.

Thus, our goal is to engage 500,000 Australians in strategic electorates via our gatherings by 2019 and to support them to each engage 3 other people, extending our reach to 2 million people - enough to shift the social climate in key electorates.

This is possible if we launch Australia wide by early 2017 and if the majority of our facilitators hit the following targets over a six month period and then retire::

In Australia, we have one of the best democracies in the world, but it is increasingly dominated by corporate interests and individuals are turning away. Consumer culture is taking over - people conceive of themselves as consumers and individuals more than as citizens and community members. People are not connected. They are frustrated by decisions from all levels of government and by political debate but feel powerless to influence either. They are overwhelmed by issues like climate change. They know something is wrong, but don’t know how to assess conflicting information or what to do about it.

Whilst focused on climate change, the conversations we facilitate, the ongoing activities we support and the skills we teach for ongoing constructive conversations will create a more connected, engaged, active and empowered citizenship and communities with benefits for democracy, other social issues and individual wellbeing.

Facilitators are volunteers, but once they have finished their six months if they meet their targets, they can step into a paid role supporting a team of facilitators - these roles should all be paid for by money raised at gatherings.

Community Organisers start as volunteers but will be supported to fundraise for a wage through donations and membership fees from Community Members, workshop fees and local community grants.

These Roles will be supported by paid staff. The amount needed to pay an ideal core staff number would be AUD$1.5million.

Our projections are that most of this money could be raised via regular and repeat donations from a small percentage of guests who attend gatherings. The remainder would be raised via major donors and philanthropic trusts and out own fundraising activities.

If we cannot raise this full amount, we could complete the project on less, relying on more volunteer labour and in kind support.

The biggest risks in this project are:

- pilot model and get content, training, support systems and processes tight enough to be ‘franchisable’

New Climate Magazine - different medium, but same goals and based on same knowledge of key principles of engagement to action such as storytelling

The resources that have been most influential in developing this proposal are:

A Summary of Diffusion of Innovations: http://www.enablingchange.com.au/Summary_Diffusion_Theory.pdf

How to start a movement by Derek Sivers: https://www.youtube.com/watch?v=RXMnDG3QzxE

By:  Climate for Change
Contest: Shifting Behavior for a Changing Climate 2016
How can we mobilize individuals and society to shift behaviors in order to address climate change?
Follow on: