Conductive roads and conductive wheels of electric car will enable use of renewable energy for road transportation on the move.

Electric cars are as green as their juice - Give an electric car the right juice and it crushes combustion engines.[6]

The idea proposes to use electricity generated from renewable energy source which will be used to power electric cars like Tesla by using a combination of conducting strips on roads and conducting tyres or wheels. The basic underlying principle will be conduction this will eliminate the need for wireless charging or inductive charging which usually drives the cost very high but since we use conduction the cost will be very low and with minimum changes on the existing road and electric cars.

Our idea proposes for a cost effective method to bring renewable energy utilization into road transportation. We already have trains that run on electricity. Now it is time for cars to run on renewable energy.

Safety on road:- A natural question that comes to mind when we say laying conductive strips with high voltage D.C current on open roads is electrification risk. 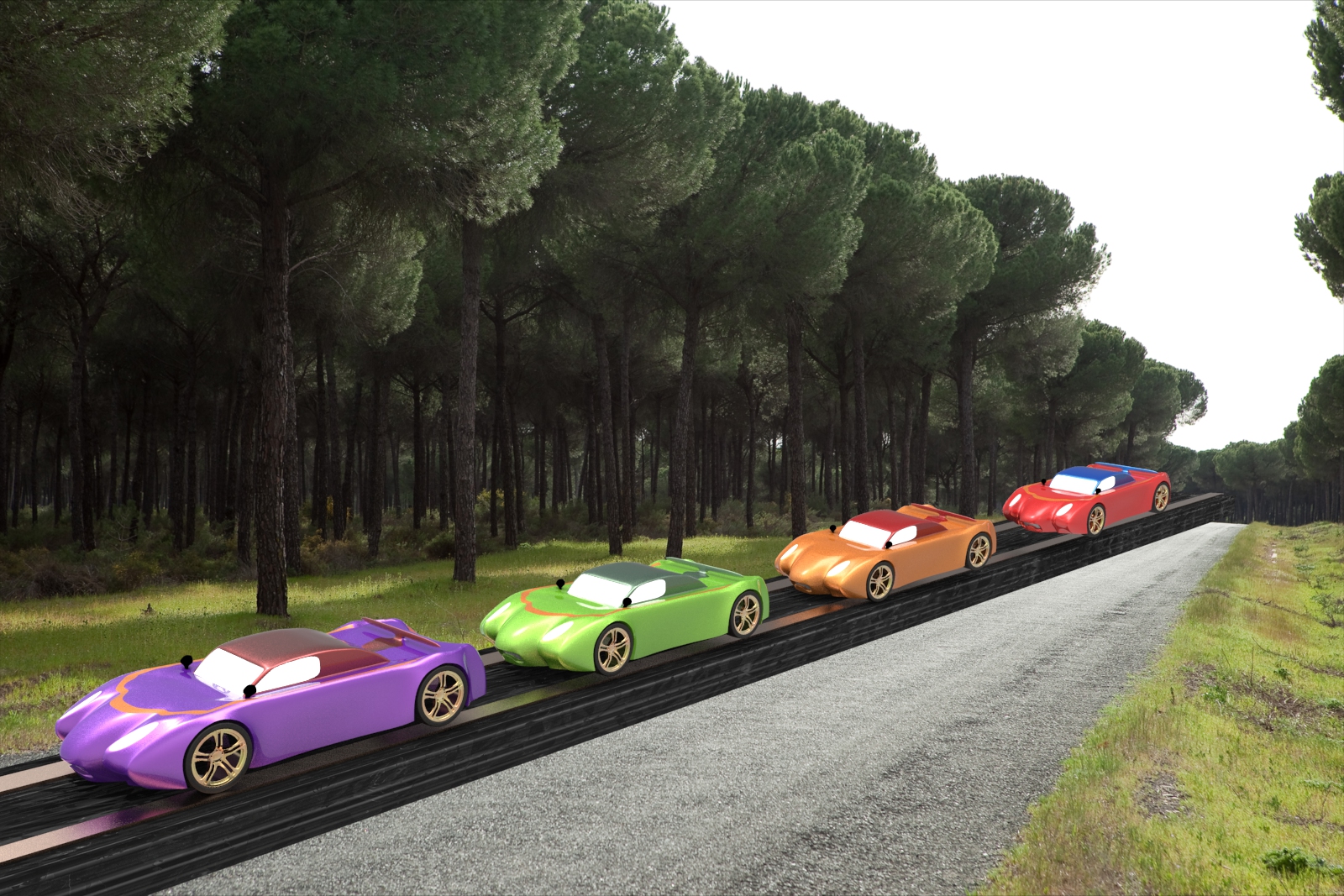 The idea is to make the roads conductive by laying it with conducting strips on each lanes, the conductive layers will be placed on piezo electric sensors which will provide electricity only when a car moves across the surface, this will ensure that the roads are safe for pedestrians also in case they need to use it.

The electric cars will be using conductive electric wheels, it conducts electricity when it runs on conductive road and it charges up the battery and powers the cars on the road. The electricity used for such transportation will be made available from renewable energy source, hence it cuts down emissions to a great extent because it does not use fossil fuels. 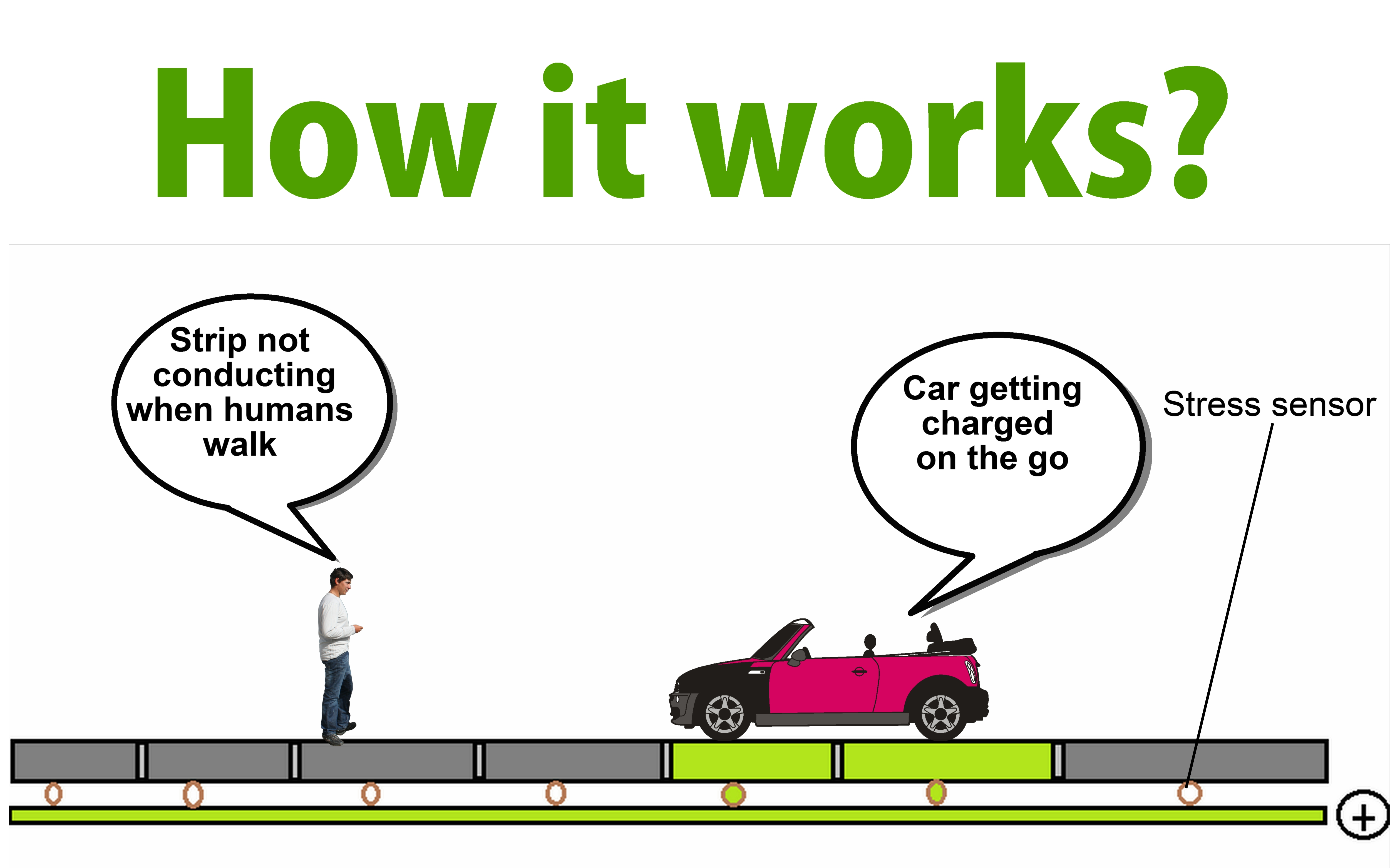 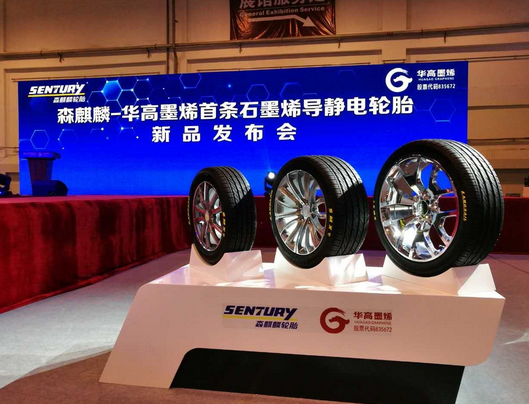 The infrastructure requirements for laying lanes with these strips and for ChargeGo.

ChargeGo charging the battery in motion.

The need to drive exactly on the strip?

The ChargeGo will be available in different lanes, so this is as simple as driving in the lane, this will most interestingly improve lane discipline because this will encourage people to drive on the lane bringing more discipline to the road improving road safety also. The track in most of the electric car chassis remain the same.

Also this will help autonomous cars to a great extend, the autonomous  cars can also rely on these conductive strips to stay on the road within the track. 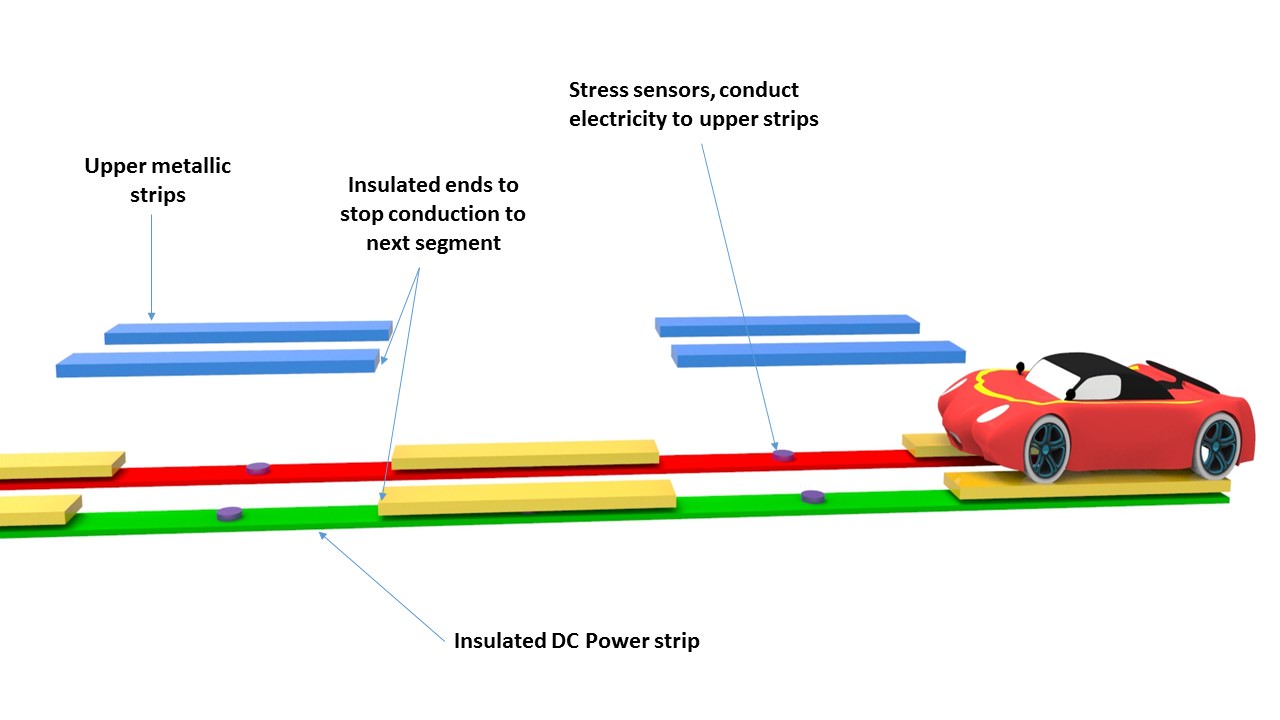 The success of the project requires a collaboration of the following three industries.

These actions will be taken primarily in Boston, United States and Bangalore, India.

Here I assume we already have an electric car, any electric car that can run on a battery will work.

Please note:- Extending the track from 500 m to kilometers cost only a few dollars per Kilometres as material used is aluminium conductive strips & and a bunch of cheap sensors.

I am a passionate Innovator, inventor and the winner of 35 grand innovation challenges till date, spanning across various industries solving a variety of problems, I use cross pollination of technology across a industries to solve simple & complex problems. Since climate change is a complex problem that is faced by humanity, I am trying to make novel innovations in this sector through my various innovation projects & inventions.

I am a graduate in Mechanical engineering & I have acquired various professional skills and certifications as part of my innovation projects in multiple fields of Engineering.I am also the founder of Givemechallenge.com an online platform which is an innovation portal for making innovation opportunities accessible to all.

By:  SAADITHYA
Contest: Transportation 2018
What initiatives, policies, and technologies can significantly reduce greenhouse gas emissions from the transportation sector?
Follow on: