Proposing Space Solar Power as a viable solution for global clean energy based on design of reusable space launch system.

Space Solar Power (SSP) [i,ii] refers to harnessing solar power from panels placed in earth’s orbit. Benefits are absence of Greenhouse Gas emissions and 24X7 availability of energy, 10 times as effective as ground-based panels [iii, i]. However, several challenges exist at the engineering, economic & policy levels. This forms the main focus of this work where the idea and motivation of SSP is presented and key challenges addressed.

Current vertical launch to space is expensive and non-reusable, hence a paradigm shift is required for affordable, efficient and reliable access. The proposal includes evaluation of technical viability of Two-Stage-to-Orbit (TSTO) system that is attractive due to its re-usable nature, safety and better fuel efficiency. The TSTO system consists of a heavy lift carrier vehicle (stage-1) which can take off and land on conventional runways and an orbital vehicle (stage-2) which can blast to orbital speeds when launched from an altitude, and can land safely on water or land using drogue parachutes. The systems comprises mainly of air-breathing engines with rocket engines used only for the final acceleration or the orbital vehicle to orbital velocity. The energy based approach by Mattingly[iv] is used to size the carrier vehicle while the Newtonian Theory[v] is used to size the orbital vehicle, thereby providing a physics-based modeling & simulation environment to size the system according to requirements.

The biggest hurdle is financial viability. Global average power consumption is expected to reach 17 TW [vi] by 2030. Reusable TSTO system reduces launch cost 10x times compared to current earth to LEO technologies[xx] and meets the $500/kg threshold that research indicates is competitive for SSP.[xix] While exhaustive testing & research is necessary, demanding new legislation for funding and international cooperation, the TSTO system may be realized with existing technologies which may significantly reduce the RDT&E and other upfront costs.

The primary challenge towards implementing SSP is the economics of launching solar panel payloads into space as indicated in the summary above. However, there are several policy and technology implementations for successful operation of SSP that are discussed in this section.

Deployment of technology and space architecture:

1.      The technology required for TSTO already exists, thereby minimizing the Research, Development and Testing costs and the Design-Cycle time to 2-4 years as indicated in table 1 above.

2.      This also includes establishment of a common international control center based on a coalition of major space-faring states namely, the United States, Japan, the European Union, China and India. These are states with existing interest and activity in SSP.

-      The control center would play a crucial role in deploying and operating space infrastructure, regulating space traffic and sharing information in order to prevent collision from space debris. [xii]

-      At the completion of this stage, each launch vehicle would carry 50,000 lbs of payload to the Low-Earth-Orbit every day for an average of 250 days in a year. See Table 2 for launch schedule.

1.    While space infrastructure is continued to be deployed, partnership with transmission companies in dense urban markets need to be established immediately in order to begin construction of receiving stations on the ground and connection to existing grid in this second stage.

-      Dense urban markets with higher electricity costs/kWh would be the primary markets to focus on. This market is chosen in order to move forward quickly to receive SSP-based energy supply and increase return on investment in the shortest possible period.

2.    Establish partnership with industry for manufacture of solar panels.

-      The importance of continuous construction of rectennas and availability of solar panels cannot be emphasized enough.

1.    Following establishment of grid connections, testing of transmission from space to the receivers and power delivery, O&M operations both on the ground as well as for space operations begin.

-      This includes operation of day-to-day operation of the control center, repair and replacement of space systems as well as coordination air/space traffic, prevention of collision with space debris etc.

In addition to establishing a coalition of governments as discussed in technology deployment, coordination of regulations and introduction of policies that enable funding for SSP program are necessary to achieve faster return-on-investment. Some policy prescriptions are discussed below:

1. Seed funding that would support conceptual and preliminary design of the system, eventually leading to greater industry involvement towards detailed design. The DoE has already enabled development of the solar power industry through this mechanism. This is therefore in line with existing US government strategy to develop the renewable energy industry.[vii]

2. Provision of incentives and tax advantages for ownership of space assets to industry similar to ground-based electricity generation infrastructure in order to increase long-term investment in SSP. One instance is the expansion of feed-in tariffs to include SSP.[xviii]

3. Review International Traffic in Arms Control (ITAR) policies in order to enable cooperation and transfer of SSP technology across countries.

5. Coalition among the major powers would also help to establish transparency over space activities as well as prevent incentives for an arms race in space, thereby deterring attack against space assets.[ix, x]

- Existing treaties not sufficient to prevent arms race and weaponization of space: Outer Space Treaty of 1967 that constitutes 103 countries and aimed at ensuring peaceful exploration of space is not sufficient owing to disagreement over language namely, what is considered peaceful use of space and what is not.[xi]

- EU Space Code of Conduct (2008) is a non-binding treaty with rules to be voluntarily adopted by space-faring states and therefore, is not sufficient deterrence to preventing a space arms race.

6. Establish joint operation of SSP and sharing of data to meet common interests in regulating space traffic and preventing loss of systems due to space debris.[xii]

1. Social acceptance of SSP depends on cultural and social norms and how society values energy security and environmental protection. [xiv]

2. This would vary geographically, among developed and developing states as well as between developed states that may value clean energy differently.

3. Changes to market structure in the energy industry: In the case of space solar power, the primary changes to the electricity network would be in generation and transmission. Therefore, if economic viability is established, it would be reasonable to assume that primary changes would need to take place in existing market structure namely, over ownership of assets at different stages of generation and transmission.

Countries that have currently active space programs such as USA, EU, China, Russia, Japan and India need to come together in order to fund the program and incentivize other countries and the private sector in the development of SSP . This is possible as several of these countries are already involved in research under their respective national space agencies. For instance, Japan is leading R&D of wireless transmission technology towards demonstrating feasibility of SSP.[xvi]   In 2010, China revealed its plan to develop SSP and obtained funding for the same from Chinese Ministry of Industry and Information Technology.[xvii]

There are other reasons that make SSP a viable source of global energy supply and provide incentives for countries to cooperate now. These include prevailing domestic politics over development of nuclear power, surging energy needs in China and India, increasing efforts towards curbing climate change by countries, industries and NGOs globally, as well as concerns over prevention of weaponization of space, all provide an incentive for the major powers to cooperate on SSP.

The specific technologies (such as solar panels, carrier vehicle design, wireless power transmission) can be outsourced to capable private industry partners as necessary, however the above countries would assume the leadership role due to their credibility with space exploration technologies.

1. R&D: The R&D work will be carried out multi-nationally among partnering countries with university partnership. The R&D work includes all three phases of design namely, conceptual, preliminary, detailed designs and flight testing of the prototype.

2. Manufacturing to be carried out in partnership with major aircraft manufacturers in the United States and the EU.

3. Launch site for SSP may be anywhere in the world because the carrier vehicle in the TSTO system can ferry the orbital vehicle anywhere necessary. However, equatorial states like Ecuador, Northern Brazil, Gabon, Congo, Kenya, Malaysia, Indonesia, and Papua New Guinea are advantageous because greater gravitational assistance to space launch.

In general, solar power generation does not emit Greenhouse Gases. Therefore, theoretically, 100% of the global industrial and domestic energy supply is free of emissions. However, this depends on number of launch sites used over the years and launch rate.  Assuming increasing number of launch sites and launch rate as in table 2, approximately 30% of global emissions may be expected to be reduced in 10-15 years from SSP operation.

1.    As source of baseload power: Existing solar generation infrastructure are not used to provide baseload power owing to variability of sunlight on earth. SSP would provide uninterrupted power supply and therefore a way to move away from baseload coal power plants.

3.    According to a study by the National Security Space Office, it has been suggested that the DoD is a potential “anchor customer” to provide power from space solar for forward bases deployed across the globe.[XV]

At the heart of the issue of viability of space solar power is the economics of space transportation, typically expressed as $/kg(lb) of payload to be transported. Current costs are in the range of $20,000 – $40,000/kg (for earth-to-geosynchronous orbit) which make SSP infeasible.[xix] With expendable rockets (existing technology) this cost can never be improved due to the high recurring costs associated with each launch. Therefore fully reusable launch vehicles with frequent launches is the right alternative. An estimate of the number of launches required depends upon the amount of energy that needs to be harvested and the efficiency of the solar panels. For instance, assuming solar panels of 2kW/kg power density, approximately 150,000 kg of payload needs to be launched every day for the next 50 years, resulting in a minimum of 3 launches per day in order to realize ~30% of the surging global energy requirement. 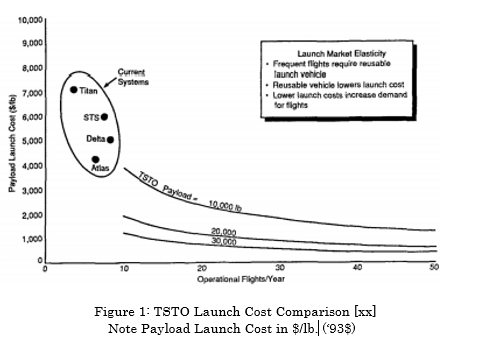 As seen in Figure 1 above, compared to costs of existing launch systems ~FY93$ 4000-FY93$ 7,000/lb, a TSTO system at 50,000 kg(~110,000 lb) with a constant launch rate of 3 flights/day and no. of launch sites from 1 site in the 1st yr to 12 in Yr 5, would achieve significant reduction in payload launch cost namely, ~FY93$ 500/lb or lower. By maintaining the above schedule, it is expected that a large portion of the increasing global energy requirement would be supplied by space solar power in 25-30 yrs.

In general, economic viability of SSP depends on comparable energy prices/willingness to pay in market, funding, cost to establish ground receiver and O&M costs.  However, literature indicates that SSP would be a viable option at a payload launch cost of  $500/kg .[xix ] Therefore, the TSTO system may be realized with existing technologies which may significantly reduce the RDT&E and other upfront costs.

1.    2-4 yrs for research and development, flight testing and manufacture since it uses existing technologies of TRL 9.

2.    2-4 yrs for establishment of an international coalition of governments, private energy and manufacturing industries and other stakeholders

3.    30-50 years for assembling SSP depending on number of launches carried out per day.